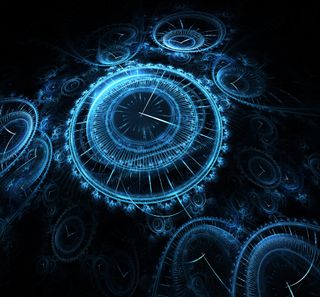 Keeping extremely precise time is key to many modern technologies, from GPS to mobile phone networks and broadcasters' transmitters. That's where optical atomic clocks, which are about 100 times more precise than microwave-based atomic clocks, come in.
(Image: © Shutterstock/Kim D. French)

The ultimate accessory in exact timekeeping — the atomic clock — is set to become even more precise, after ultrashort laser pulses were successfully transmitted across open air to help synchronize the "ticking" of new optical atomic clocks.

Keeping extremely precise time is not just a question of scientific achievement. It is a key to many modern technologies, from Global Positioning Systems (GPS)to mobile phone networks and broadcasters' transmitters. For GPS systems, an error of just one nanosecond, or a billionth of a second, would mean the location is about 12 inches (30 centimeters) off.

To ensure maximum precision, the U.S. national time standard is determined by atomic clocks. Current ones use extremely cold cesium atoms, laser-cooled to temperatures close to absolute zero. The cesium atoms are then blasted with microwaves until the atoms vibrate at a certain frequency. That frequency is equal to the energy that gets absorbed when the microwave radiation causes the cesium atom's outermost electron to jump to a higher orbit, or 9,192,631,770 Hz. What we call "the second" is then derived from the duration of 9,192,631,770 periods of this frequency. [Wacky Physics: The Coolest Little Particles in Nature]

Now physicists are developing new optical atomic clocks which could be about 100 times more precise than microwave-based ones. They operate in a similar manner, but use laser light instead of microwaves. Laser light has a much higher frequency and hence gives much better timing resolution and much faster transmission of data.

Many national timekeeping laboratories have at least one type of an optical atomic clock,but the definition of a second does not yet rely on them, partly because it is not yet possible to ensure all of these clocks tick at exactly the same rate.Optical atomic clocks are extremely delicate devices, and also, not all of them are of the same type. They can be using completely different species of atoms — such as aluminum ion, strontium neutral or ytterbium ion, which are just some optical analogues of the microwave clock.

But even if the optical clocks in different labs use the same atoms, the clocks' accuracy depends on how well scientists control the atoms' environment, said Patrick Gill of the National Physical Laboratory in the U.K. Factors include"the background temperature, whether there is magnetic and electric field noise, also the precise influence of gravity, [because] clocks at different heights give different readings due to Einstein's general relativity."

To use optical atomic clocks as a common global timescale, the time on all the clocksmust match up. Making sure the clocks match up is relatively easy if the clocks sit next to each other in the same lab, Gill said, but is more difficult for remotely located clocks.

Currently, the best way to make optical clocks match up is by relaying the optical frequency, or the light, to the remote clock by sending that information along an optical fiber in order to compare the two frequencies and "see how well they agree," Gill said. He added that if the clocks don't agree, scientists must figure out what's causing the glitch and then control for that factor.

"This is absolutely paramount if we want to make full use of the optical clock capability," Gill said.

But fibers are not an ideal solution for remote and difficult-to-access areas.

So physicists at the National Institute of Standards and Technology (NIST) in the United States decided to do away with cables. Instead, they used a laser to generate ultrashort infrared pulses at a very precise rate of 1 picosecond every 10 nanoseconds, where 10 ns corresponds to a set number of "ticks" of an optical atomic clock.

The NIST team transmitted the pulses from one location toward a mirror 0.62 miles (1 kilometer) away; the pulses reflected off the mirror and transmitted back toward a third location not far from the first — effectively showing thatit was possible to take a very precise ticking clock and transfer its ticks to a location 1.2 miles (2 km)away "without messing it up,"said study co-author Nathan Newbury of NIST's Quantum Electronics and Photonics Division. "The actual link is a loop."

The test was done across land, but eventually, the researchers hope, it should be possible to transfer the pulses via satellites.

In the future, optical atomic clocks could be used for satellite-based experiments to prove Einstein's theory of general relativity and create more precise GPS satellite navigation systems, which "could be improved in the sense that you could put better optical clocks in satellites and crosslink them optically," Newbury said. [Top 10 Inventions That Changed the World]

"There may be an argument for security. Currently, GPS is fragile in the sense you can jam it. A system with an optical backbone is much more secure since you cannot jam it —optical systems are directional, so they are much harder to jam," Newbury added. "It is also why optical signals are tougher to send and receive, because you have to point at the correct place."

Atmospheric turbulence is one hurdle optical clocks will need to clear, as the molecules in the air, in some instances, can break up an optical signal and lead to a timing error.

"Our system is not limited by the link length, as far as precision is concerned, but of course at some point, turbulence can interrupt the link," lead study author Fabrizio Giorgetta, also of NIST, said. "If there is dense fog, there's nothing we can do." But during wind or rain, he added, a so-called stirring mirror helps to correct for the turbulence.

Gill of the National Physical Laboratory in the U.K., who was not involved in the research, called the study "a good starting point" for an alternative method to optical fibers for precise optical atomic clocks.If the optical method works, the bell might toll for microwave-based atomic clocks.

Funded in part by DARPA, the study was detailedin the journal Nature Photonics.