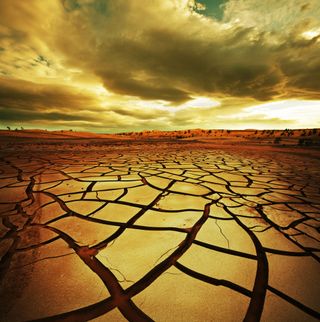 The sunward side of Earth would scorch, but humans could inhabit the border between constant sunlight and constant darkness.
(Image: © Image via Shutterstock)

Earth's spin controls our lives. As the planet dances around the sun, we sleep and wake by its daily pirouette. The rotisserie-style heating keeps Earth warm and sunny all the way around, and Earth's rotation also drives the geomagnetic field, weather patterns and the circulation of the oceans. Bearing all that in mind, one wonders: what if the world stopped turning?

"It would be a total mess," said Louis Bloomfield, a physicist at the University of Virginia. Most humans would drown, suffocate, roast or freeze to death. But it's not all bad news: A select few of us who happen to live in one of four well-situated spots on the planet would survive — and probably rapidly evolve in response to our dramatically altered environment.

Amazingly, Earth would literally change shape if it ceased to spin. Earth's rotation makes its midsection bulge; it is 26 miles farther around at the equator than it is from pole to pole. If the spinning stopped, that solid-Earth bulge wouldn't immediately relax, but the bulge of the oceans, which are much more fluid, would. "The oceans would shift from the equator toward the poles, leaving Earth's surface bone dry near the equator and swamped in miles of water at the poles," Bloomfield told Life's Little Mysteries.

The atmosphere would shift in a similar fashion, he said, becoming thicker at the poles and thinner at the equator. Only Earthlings living at a sweet spot around the mid-latitudes would experience the right atmospheric pressure to survive the transition. [What if the Sky Fell?]

Furthermore, constant sunshine would strike over whichever half of Earth ended up locked toward the sun. That side would be blisteringly hot; the vegetation would die off and the land would dry out and crack. The opposite hemisphere would sunk into permanent, icy darkness, and the land would resemble frozen tundra. "Humans would have to move to the transition area," said Rhett Allain, a physicist at the University of Southeastern Louisiana and blogger at Dot Physics.

We would be confined to a thin band of Earth along the hot-cold border, where the sun would always appear just above or just below the horizon. Here, the temperature would be moderate, but the ways in which weather and climate patterns on a non-spinning Earth would change are too unpredictable for the scientists to describe the scenery more fully. At any rate, land on the hot-cold border should be habitable enough for humans to make a go of it. "If you're on the sunny side but where the sun appears very near the horizon, you'll be able to grow crops, but you're not going to get quite as extreme solar heating there," Allain said. People could cross over to the barely dark side at night. "It would be warm enough there because there would still be some sunlight, because the atmosphere diffuses the sunlight (just like it's not pitch-black at night)."

Of course, humans couldn't live along the entire hot-cold border, but only in the stretches that contain an atmosphere that's suitable for breathing. "There are going to be four patches that have a decent mixture of the right atmospheric pressure and the right temperature: two in the Northern Hemisphere and two in the Southern Hemisphere," Bloomfield said.

The four human tribes would be permanently separated by the harsh conditions that stand between them. That and environmental differences between the patches would drive the evolution of four distinct humanoid species. They'd all need to be hardier and thicker-skinned than current humans, in order to deal with the greater influx of cosmic radiation they would experience in the absence of a geomagnetic field.

Now, here's some bad news: Earth is, in fact, headed for an eventual rotational standstill. The heave-ho of the land and ocean tides that result from the spinning take a toll on the planet, and the energy driving all that sloshing back and forth gradually winds us down. When the moon ran out of spinning steam, it became "tidally locked" to Earth, and now the same side of the moon always faces our way. Give it a few eons, and the same thing will happen to Earth; first we'll become tidally locked to the moon, then a few billion years after that we'll lock up to the sun.

That is, it would happen, if the sun weren't destined to die in a massive explosion first, blowing the solar system and its future plans to smithereens.