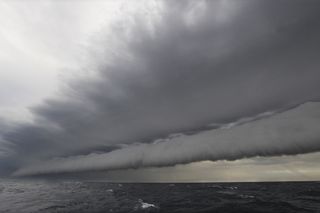 Paradoxically, this is no airy affair. All the oxygen, nitrogen and other stuff in Earth's atmosphere has a whopping combined mass of 5 quadrillion tons, so a falling sky would mean that nearly 10 tons of molecules — roughly the heft of a school bus — would drop on every square meter of Earth's surface. Pancakes, everyone?

To keep things interesting, let's envision a less "crushing" scenario: What if the atmosphere suddenly disappeared — if an exceedingly rarequantum fluctuation caused all the atmospheric particles to unexpectedly jump to the other side of the galaxy, leaving Earth floating in a vacuum?

Vaclav Smil, distinguished professor in the faculty of environment at the University of Manitoba in Canada, said three things would kill us: oxygen deprivation, a severe drop in temperature, and exposure to a full dose of UV radiation from the sun, most of which the atmosphere currently blocks. "But the lack of oxygen comes first and it could not be survived," Smil told Life's Little Mysteries.

As all the birds and airborne insects plummeted to the ground around us like rocks, lacking an atmosphere to beat their wings against, and as the world fell eerily mute, lacking the air that normally carries sound, we would all die of oxygen deprivation in less than three minutes, Smil said.

If you happened to be one of the few hospitalized humans hooked up to a respirator when the sky vanished, you'd still be out of luck. "Being hooked up to a respirator, or other source of oxygen (like a scuba tank) wouldn't help — without the atmospheric pressure, we couldn't breathe," said Geoffrey Landis, a scientist at NASA's John Glenn Research Center and science fiction writer. That's because lungs suck in and exhale air by raising and lowering the air pressure inside them relative to the outside air pressure. If there's no differential, you won't be able to take your last breath.

In the aftermath of our demise, Earth would gradually chill down. The atmosphere normally keeps Earth toasty by trapping solar radiation at its surface, preventing the heat that hits the planet from immediately re-radiating into space. According to Smil, without this greenhouse effect, Earth's average temperature would drop to minus 18 degrees Celsius, or just a shade below zero degrees Fahrenheit, and the temperature would swing wildly between day and night.

As for the oceans, their top layers would freeze. But first, they would boil.

Life in a bubble

Would anything survive on an atmosphere-less Earth? Nothing big enough to see, said Lynn Rothschild, an evolutionary biologist and astrobiologist at NASA Ames Research Center. Complex organisms are aerobic, meaning they require oxygen, but anaerobic organisms, such as some bacteria, could survive — but only species that live underground. "The problem is you've lost your ozone field so you have a tremendously high radiation flux at Earth's surface," Rothschild said. "With the UV flux, the surface would be sterilized right away." A few feet down, however, there would be a thriving (though invisible) ecosystem.

If we knew in advance that the sky was on its way out, there are two ways we could prepare for the change. First, we could build pressurized domes, and fill them with plants, which would both sustain the carbon-oxygen cycle and serve as a food source. "It would be just like learning to live on an airless planet or on the moon — we would need pressurized habitats. There have been many plans for making lunar bases that could be self-sufficient, so if we had time, we could take such plans and turn them into habitats for Earth," Landis wrote.

Option two eliminates the need for artificial pressurization: "We could live underwater! At only ten meters depth (about 30 feet), the water pressure equals one atmosphere. So, as long as we can find a way to make oxygen to breathe (perhaps by electrolyzing seawater), we could just live in underwater habitats."