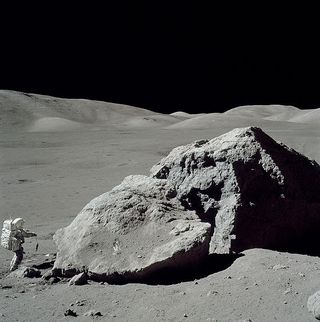 "There's a reason we've never gone back to moon," teases the poster for the new horror sci-fi flick "Apollo 18." The movie claims to reveal decades-old footage of astronauts on a secret mission two years after Apollo 17 – the last real expedition to the Moon – flew in 1972. (Without giving away anything that isn't in the trailer, lunar aliens apparently share some blame for our 40-year absence from the Moon.)

In actuality, NASA did prepare for Apollos 18, 19 and 20. But these missions were scrapped amid budgetary concerns and a decline in public interest.

"The whole world was glued to Apollo 11," said David R. Williams, planetary curation scientist at the NASA Goddard Space Flight Center in Greenbelt, Maryland. "But by the time they got to 16 and 17 the general public just really wasn't that interested anymore." [Could NASA Launch a Secret Moon Mission?]

Even before Apollo 11 – the first lunar landing in July 1969 – the government had already axed the program's loftier ambitions. Planners had envisioned Apollo leading to a lunar base, for instance, and a manned mission to Mars was entering the conversation.

"There could've been a much more protracted program with a lot more interesting hardware and complex missions," said David S. F. Portree, manager of the Regional Planetary Information Facility for the U.S. Geological Survey's Astrogeology Science Center in Flagstaff, Ariz. Portree has written historical texts for NASA and blogs at "Beyond Apollo."

The Apollo program originally called for 10 moon landings – Apollo missions 11 through 20. NASA even selected landing sites for 18, 19 and 20. (After the near-disaster of Apollo 13 and later cancellations, administrators shuffled the sites around. Apollo 15, for example, landed at the Hadley Rille, where Apollo 19 would have visited.) [What If the Moon Had Never Formed?]

"The general idea was to more or less repeat Apollo 17 for three other locations to really get the Moon mapped out," said Williams.

The nixed Apollo missions, like their predecessors, would have further examined the lunar environment by returning more rock samples to Earth and conducting new experiments. Instruments would have studied the Moon's surface radiation and dust levels in detail in order to lay the groundwork for an eventual laboratory.

"The main point of a good number of these experiments was to determine what the long-term lunar environment would be if you wanted to put a base there," Williams said. "The idea was after Apollo they were going to build a semi-permanent habitat there and have a crew of astronauts maybe stay for a few weeks [at a time]."

Instead, the Apollo program wound down in the early 1970s and segued into Skylab. This space station remained aloft from 1973 to 1979 and was serviced and staffed by astronauts in Apollo modules. The last official Apollo mission – the Apollo-Soyuz Test Project, a joint effort with the Soviet Union – saw the docking of an Apollo and a Soyuz module in 1975.

Some NASA scientists had grand plans heading into AAP's establishment in 1968. But the program's budget as allocated by Congress severely constrained what might have been, Portree said.

Another mission that never took off, but had been in the works for years, was a manned flyby of Mars using Apollo and AAP hardware. Slated for the mid 1970s, the quest's four-man crew would conduct telescopic observations and run experiments on themselves to learn about the health effects of prolonged weightlessness. The astronauts would arrive back at Earth about a year later. [Would Humans Born on Mars Grow Taller Than Earthlings?]

Other proposed journeys included dual-planet flybys of both Venus and Mars, as well as launching probes to collect samples for return to Earth.

With these proposals, "there was the idea of creating a bridge – a little bit like Gemini was for Apollo – for much more complex Mars landing missions in the 1980s," Portree told Life's Little Mysteries.

Events did not conspire to bring about such challenging expeditions then or since. According to Portree, Congress felt NASA needed to be punished after the tragic Apollo 1 fire that killed three astronauts in January 1967, and that lead to budget cuts for future endeavors. The rising costs of the escalating conflict in Vietnam did not help NASA's budget either, and the new Nixon administration, elected in 1968, wanted to carve out its own space policy distinct from the Apollo years.

Were it not for these factors, Portree said, "I think the more ambitious Apollo and Apollo follow-ons would have happened."

An expanded Apollo program might have produced more than a legacy of awe-inspiring planetary excursions. The Apollo as it actually existed also spawned loads of so-called spinoffs – commercialized technologies developed by NASA.

Had Apollo carried on, "maybe the computer boom would have happened sooner," Portree speculated. "Maybe we would have learned new things about medical problems people have on Earth because we were trying to solve them for astronauts bound for Mars."

Of course, beyond NASA's preliminary sketches, the voyages an enduring Apollo program might have embarked on – and the technological advances they could have sparked – remain science fiction. Although it's unlikely that Apollo 30-something would have put mankind on Mars, such an alternative history does seem less far-fetched than Apollo 18 finding aliens on the Moon.

That the Apollo program actually succeeded is perhaps the greatest surprise of all, as no one has since set foot on the Moon.