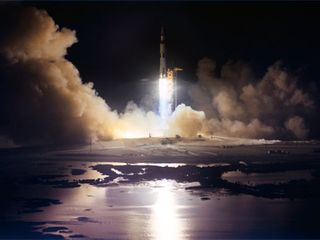 If NASA were to launch a secret moon mission, setting off at night, as Apollo 17 is shown doing here, might be a good start.
(Image: © NASA)

The new film "Apollo 18" is like "The Blair Witch Project" of space travel flicks, couched as found footage shot by NASA astronauts during a secret mission to the moon in 1973. In the story, the astronauts encounter unfriendly lunar aliens, chaos ensues and NASA forever hushes the whole thing up.

It's science fiction, of course: History has it that Apollo 18, along with 19 and 20, was canceled — Apollo 17 was NASA's final lunar mission. But the new film will surely stoke conspiratorial fires about the agency's secret activities. Might NASA really have launched a secret human spaceflight during the Apollo era, without anyone noticing it?

Too many eyes and ears

"Developing the entire manned program involved 400,000 people, so to cover up the whole thing you'd have to keep them all quiet," Craig Nelson, a space historian and author of "Rocket Men: The Epic Story of the First Men on the Moon" (Viking 2009), told Life's Little Mysteries. "Just to send astronauts up in the air required a crew of 300 people. Not only did you have all of them working as part of NASA, but a huge percentage worked for other contractors, so you'd have to have hundreds of people keeping a secret forever."

According to archival records, the number of NASA employees had, in fact, dropped to around 200,000 by 1973, the year Apollo 18 was originally scheduled to take off. That's half the peak employment of 1965, but still a huge number of people to keep silent, had NASA carried out a lunar mission in secret. [What If NASA Hadn't Canceled the Apollo Program?]

Furthermore, Nelson pointed out that the space agency would have somehow had to quiet the millions  of people who saw each liftoff of the Saturn V rocket (which delivered Apollo's lunar capsules into space) as it left the launch pad at Kennedy Space Center in Florida. "There's no way [NASA] could cover up a launch. They could claim that the Air Force was doing it, but even then they would have to completely disguise an Apollo mission as an Air Force satellite mission, and that would be extremely difficult," Nelson said.

If NASA were to attempt a secret launch in today's world, in which there are more watchful eyes and more avenues for information sharing, he thinks the space agency would be even less able to hide a launch from the public.

That's not to say that it couldn't be done at all, though.

The "Apollo 18" trailer includes a snippet in which the astronauts are communicating with the Department of Defense (DoD), suggesting that it is involved in the secret mission. (The astronauts, however, are decked out in NASA gear and communicate with personnel in Houston, the location of NASA's mission control center.) Filmmakers might be playing off of the fact that the DoD's space program is much more secretive than NASA's, making the premise slightly more conceivable (though more confusing, too).

"The space budget at the Pentagon is much bigger than NASA's budget," Nelson said. "They launch missions all the time and they don't reveal hardly any of it. They have their own launch pad next to NASA's in Florida, and another launch pad in California." [7 Things That Create Convincing UFO Sightings]

The Department of Defense's space budget currently stands at $26 billion; by comparison, NASA's budget is $18 billion. The bulk of the DoD funds, according to Gregory Schulte, the deputy assistant secretary of defense for space policy, pay for satellites that aid in ground navigation, missile launch detection and smart bomb precision. The military satellite network also helps to relay unmanned aerial vehicle feeds to troops, and to track space junk, which can collide with satellites.

Satellites aren't the whole story when it comes to the military's space operations, though. Last year, the Pentagon sent a spacecraft called X-37B, which looks like a miniature space shuttle, into low-Earth orbit. The launch wasn't secret — the Pentagon has said that it couldn't hide a launch even if it tried — but everything else about the mission, including what it accomplished and why, is classified.