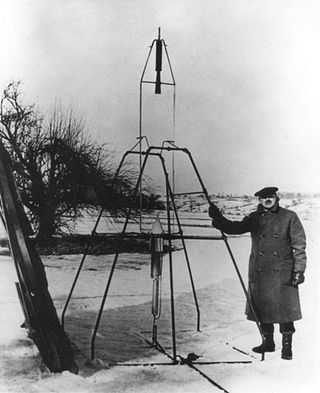 Dr. Robert H. Goddard and a liquid oxygen-gasoline rocket in the frame from which it was fired on March 16, 1926, at Auburn, Massachusetts.
(Image: © NASA)

With the Space Shuttle officially retired in Florida, NASA astronauts could use a lift to the International Space Station. Want to start your own interstellar livery service? We asked John Malinzak, a rocket scientist at Pratt & Whitney Rocketdyne, for a few tips on how to get from Earth into orbit. As for how to get your hands on a rocket, well, you're on your own.

1. Get to Know Your Rocket

At its root, a space rocket is anything that propels something else from Earth into space with ultra quickness. The iconic look is a long white tube, like Boeing's Delta launch vehicles. The body is sheet metal, nearly as thin as a tin can, but when pressurized and loaded up, it stiffens enough to withstand immense forces at launch and during flight.

Inside the body you have the engine control unit, the brains of the operation, which commands the flow of fuel and timing of ignition. A series of pumps and valves suck fuel from storage tanks and inject it into a gas generator. They are the rocket's heart. Most engines are wrapped in ducts and small lines the arteries that direct the propellants where they need to go.

When ignited, those propellants turn to hot gas in the main combustion chamber, which you can think of as the rocket's digestive system. Those hot gases shoot out the thrust chamber or nozzle (picture those three big round tubes on the end of the Space Shuttle), propelling the gas backward and the rocket forward.

Rockets are typically driven by the mixing of liquid oxygen (the oxidizer) and liquid hydrogen (the propellant), which are stored in tanks at -300 degrees Fahrenheitn and -423 F, respectively. RP1, a refined form of kerosene, is a common substitute for hydrogen. The tanks are filled up just prior to launch at the launch pad through hoses, a space-grade gas station. For the Space Shuttle the process took about six hours, with lots of topping off. Many rockets with a heavy payload need an extra boost off the ground, so they have additional solid fuel motors, which burn a murky slurry combo of combustibles.

Ignition in a rocket is more or less like turning the key in your '95 Civic except there's no key and instead of four sparkplugs igniting gasoline once per second, there are many (for redundancy) sparking 100 times per second.

Before ignition, the engine control unit commands the pumps to pull the oxygen and hydrogen from their tanks and shoot them into the engines. They mix at the injector, where the ignition sparks, turning the cold liquids into gas at 5,000 F to 6,000 F. (Some perspective: That immediate temperature change is equivalent to about half the surface temperature of the sun.) The liquid fuels can be throttled up or down as needed, and the ignition sequence can be repeated until the vessel enters orbit. The solid fuel in the booster, however, is sparked once at launch, burns for a couple minutes like a huge roman candle, then falls off.

Very much unlike your Civic, a rocket boasts a pretty spectacular zero-to-sixty. The Space Shuttle could hit "escape velocity" the 17,500 mph required to escape Earth's gravitational pull and put a vessel into orbit in eight minutes. (The Delta II can shave off a minute or two.) The transition from subsonic to supersonic speed, Mach 1, or about 760 mph, puts a heap of stress on a rocket, so being able to control the throttle comes in handy. Throttling back the liquid engines temporarily removes the force of acceleration to help the rocket get through the sonic barrier, and once it does, you can open the throttle back up to push on into orbit.

At this point, you get to call a MECO, or "main engine cut off." The rocket has successfully bested gravity and releases the payload into orbit. Its mission complete, the rocket portion falls away. Most rockets are expendable, meaning they are designed to dump and run. One reason the Space Shuttle was such a big deal is that it was an all-in-one, made for launching, orbiting and returning to Earth. Space Shuttle Atlantis made its final touchdown early in the morning of July 21, 2011. A special buh-bye to you.