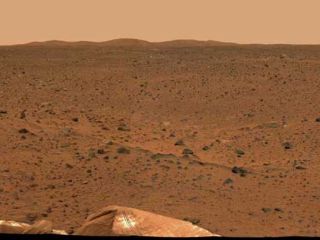 This is a portion of the first 360-degree view of the martian surface taken by Spirit's panoramic camera. Part of the spacecraft can be seen in the lower part of the image. Photo
(Image: © NASA/JPL/Cornell)

Robert Zubrin, President of the Mars Society, a nonprofit dedicated to the exploration of the ruddy fourth planet, says that there's nothing holding us back from landing a man on Mars except ourselves. That is, NASA and the current presidential administration have shifted their focus (and resources) to other destinations, mainly asteroids.

Zubrin concocted a scheme two decades ago that relies on technology we already have: powerful rocket boosters, surface rovers, nuclear reactors. Here is his Mars Direct Plan, in five steps.

Step 1. Get a really big rocket

According to Zubrin's Mars Direct Plan, a rocket on the order of the Saturn V, which, with its total 8.7 million pounds of thrust first put man on the moon, is all we'd need to send a 40-ton payload on a trajectory to Mars, and ultimately put men on the Red Planet. The Saturn V hasn't flown since the 1970s, but SpaceX's brand-spanking-new Falcon Heavy could be a prime candidate for just such a task.

SpaceX founder Elon Musk has suggested as much and Zubrin concurs, calling the Falcon Heavy "the closest thing on the horizon that gets you in the range." However, he says, it's not quite as powerful as the booster he envisioned in his original plan, and would require a variant three-launch, three-rocket approach. (For simplicity's sake, we'll ignore that for now. Just keep in mind that you need a really big rocket.) [How to Launch a Rocket into Space in 5 (...4...3...2...1) Steps]