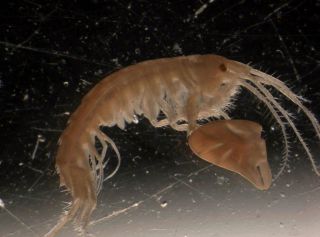 What makes a female marine crustacean "swipe right" on a prospective mate? If she's Dulichiella appendiculata — a tiny relative of the sand-hopping beach flea — she's impressed by the size of the male's enlarged right front claw, which is significantly bigger than its left one.

And she definitely prefers righties to lefties.

Scientists have investigated the mating success of right-clawed D. appendiculata males versus their left-clawed rivals, and found that righty males attracted more females. But lefties were found to be more solitary than righties, with a tendency to disperse into more habitats. And moving into a territory where there's less competition increased their chances of finding a willing female, the scientists found. [In Images: The Menagerie of Tiny Alienlike Creatures Under the Sea]

Study lead author Pablo Munguia, an ecologist and evolutionary biologist at the University of Adelaide's School of Biological Sciences, told Live Science in an email that he "bumped into" this heavy-handed species while studying reef diversity in Florida for his doctoral dissertation. Munguia was captivated by the peculiar asymmetrical claws, which were present only in males. But it wasn't until more than a year later that he realized that there were "righties" and "lefties" in D. appendiculata populations, and that this might be linked to mating prowess.

Looking for a right-hand man

D. appendiculata is a type of amphipod — a flattened and shell-less crustacean — that lives on reefs or hard structures like shells, and measures about 0.2 to 0.24 inches (5 to 6 millimeters) in length.

And in relation to its body size, one of the male's two claws is enormous.

"The claw can be 2 to 3 millimeters (0.08 to 0.12 inches) long," Munguia told Live Science. "To put it in perspective, it is 20 to 30 percent of the length of the adult male," he said. This kind of dramatic asymmetry is rare in animals, the study authors reported.

The claws grow as the male matures, Munguia said. Juveniles are miniature versions of the adult forms, and their bodies — and the males' claws — get bigger with every molt. In addition, the claw takes on its distinctive ax-like shape over time. It's not yet known at what age D. appendiculata becomes sexually mature, though Munguia said that other closely related species reach sexual maturity about a month after hatching.

"When males reach approximately 3 millimeters [in length], one can tell whether the individual is becoming a righty or a lefty," Munguia said.

Males use their enlarged claw not only to attract females, but also to guard their mates from other males.

To study these tiny creatures, Munguia spent three summers collecting and analyzing hundreds of individuals living inside pen shells, which were vacant of their usual mollusk inhabitants, in Florida seagrass beds. The researchers discovered that there were approximately the same number of righty and lefty males in the overall populations.

But wherever there was an abundance of D. appendiculata, most of the males were right-clawed, Munguia told Live Science. The right-clawed males tended to congregate around females — and each other — more than the left-clawed males, which were quicker to seek out new habitats where competition would be lower.

Females preferred males with an enlarged right claw, but in habitats where populations were sparse, lefties dominated, and were more likely to find a mate than if they were living in more crowded spots.

"The two alternative modes of gaining access to females seem to have found a balance," Munguia wrote in the email. Further studies will determine the stability of this balance between righties and lefties in D. appendiculata and in related amphipod populations in other marine habitats, he added.

The findings were published online May 31 in the Journal of Crustacean Biology.