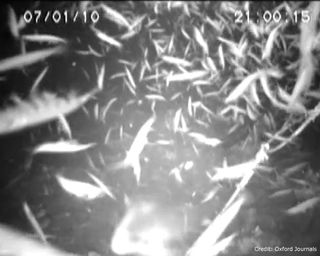 The sex lives of the ocean-dwelling crustaceans known as krill have been largely a mystery. Now deep-water cameras have revealed how, and where, these tiny animals do it.

The black-and-white footage collected by cameras at 16 stations off East Antarctica shows the ghostlike creatures darting about. By analyzing these images, the researchers, led by So Kawaguchi of the Australian Antarctic Division, broke the mating sequence down into five steps. And with the help of an animator, the footage became a short film explaining krill sex. [See krill-sex animation here]

In the footage, mature males are identifiable by their elongated shapes and prominent antennae. Females have thoraxes – the region between their head and abdomen – swollen with eggs.

The mating sequence begins with a chase, in which the male pursues the female. During the "embrace," the male positions his packet of sperm and then transfers it to the female either while embracing her as they face each other, or during the next phase, when he wraps his abdomen around the female's abdomen. The pretzeled couple then swims in circles together before separating. [See the video footage here]

Krill are a crucial part of marine ecosystems, particularly in Antarctica.

"Many of the whales, penguins, seabirds, fish — they are all dependent on krill populations as their main prey source," said Joseph Warren, an assistant professor at Stony Brook University's School of Marine and Atmospheric Sciences. "As krill go, so will the other animals that exist down there." Warren, whose school is based on Long Island in New York, was not involved in this krill research.

Prior to this study, it was believed that adult krill live, mate and lay their eggs on the surface of the ocean. But the footage revealed swarms of krill as deep as 2,362 feet (720 meters) and mating that could take place even near the seafloor. (Because the deep-water cameras were equipped with lights, it is possible that the light stimulated krill into mating there, the researchers concede.)

This discovery raises questions about where they lay their eggs, the researchers said.

Ocean-dwelling animals are tricky study subjects because they are tricky to observe and collect,  Warren noted.

"We are probably a little biased in the studying of these animals, because we are only able to study them in near-surface waters," Warren told LiveScience. "We may be missing significant numbers of them when we do samples and surveys."

The study was published online in the Journal of Plankton Research Feb. 20.