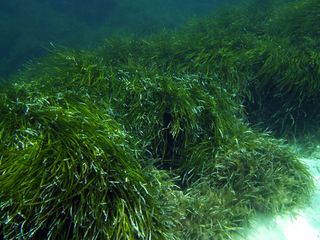 Seagrasses are a vital part of the solution to climate change and can store up to twice as much carbon as the world's temperate and tropical forests, new research indicates.

"Seagrasses only take up a small percentage of global coastal area, but this assessment shows that they are a dynamic ecosystem for carbon transformation," study researcher James Fourqurean, of Florida International University, said in a statement. "Seagrasses have the unique ability to continue to store carbon in their roots and soil in coastal seas. We found instances where particular seagrass beds have been storing carbon for thousands of years."

The study was the first global analysis of how much carbon is stored in seagrasses and demonstrates that coastal seagrass beds store up to 83,000 metric tons (about 91,000 short tons) of carbon per square kilometer (about 0.4 square miles), mostly in the soils below them. For comparison, a typical terrestrial forest stores around 30,000 metric tons (33,000 short tons) per square kilometer, mostly in the form of wood.

This research also estimates that, although seagrass meadows occupy less than 0.2 percent of the world's oceans, they are responsible for more than 10 percent of all carbon buried annually in the ocean.

The study was published yesterday, May 20, in the journal Nature Geoscience.

Seagrasses are among the world's most threatened ecosystems. Roughly 29 percent of all historic seagrass meadows have been destroyed, mainly due to dredging and degradation of water quality.  Every year, at least 1.5 percent more seagrass meadows are lost. This study estimates that emissions from destruction of seagrass meadows can potentially emit up to 25 percent as much carbon as from terrestrial deforestation.

"One remarkable thing about seagrass meadows is that, if restored, they can effectively and rapidly sequester carbon and reestablish lost carbon sinks," study researcher Karen McGlathery, of the University of Virginia, said in a statement.

Seagrasses have long been recognized for their many ecosystem benefits: They filter sediment from the oceans; they protect coastlines against floods and storms; and they serve as vital habitats for fisheries production.

"The results of this global analysis emphasizes the importance of seagrass conservation and restoration," study researcher Bill Dennison, of the University of Maryland, said in a statement. "In addition to providing habitats and nurseries for fish and shellfish and stabilizing sediments to reduce erosion, we now know that seagrass meadows have a crucial role in regulating global carbon."

"Our vital seagrass ecosystems have always been a conservation priority, given their myriad benefits of ecosystem services to local communities" Emily Pidgeon, of the Blue Carbon Initiative, a group which funds this project, said in a statement. "Now we must also recognize the vital importance of coastal 'blue' carbon ecosystems, such as seagrass meadows, for their importance to global climate health."