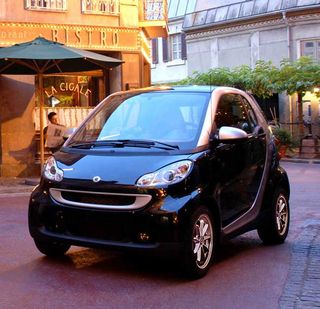 Editor's Note: This occasional series of articles looks at the vital things in our lives and the chemistry they are made of.

Even if cars soon start running entirely on electricity or hydrogen, they'll still need 100 gallons or more of oil to make their plastic parts, such as seats, dashboards, bumpers, and engine components. And some day that plastic may be recycled back into fuel.

Cars of old were mostly steel, but the use of lightweight alternatives has dramatically increased in the last couple of decades. Whereas almost no plastic could be found on a car from the 1950s, today's automobiles have more than 260 pounds (120 kilograms) of plastic on board, according to the Transportation Energy Data Book.

"It is expected that high oil prices and strict CO2 standards will accelerate the growth [in plastic use]," says Aafko Schanssema from PlasticsEurope, a plastic industry group based in Belgium.

Plastics improve fuel economy by reducing weight, but they also require petroleum as a raw ingredient.

Although different plastics have different recipes, it takes roughly 0.4 gallons of crude oil to make 1 pound of plastic. Globally, around 8 percent of the oil that comes out of the ground is used to make plastic.

However, steel is still the single most important material in cars. It is strong, durable and malleable. On the flip side, though, it is relatively heavy. For this reason, car manufacturers have been trimming down on its use.

For domestic cars, the percentage of weight in steel and iron has dropped from 75 percent in 1977 to 63 percent in 2004, according to the Department of Energy's Transportation Energy Data Book.

Some of the steel has been replaced by lightweight aluminum, whose percentage has grown from 2.6 percent in 1977 to 8.6 percent in 2004. Plastic has seen a similar rise in prominence, going from 4.6 to 7.6 percent over the same 27-year period. (In Europe, the average car currently has closer to 11 percent plastic, Schanssema said.)

A 2005 PlasticsEurope study showed that every pound of plastic in a car replaces roughly 1.5 pounds of traditional materials.

Based on this weight reduction, the same study calculated that plastics provide a fuel savings of about 3.8 percent. However, cars haven't improved their gas mileage by that much.

"On the whole, U.S.-made cars have increased in total weight, so that whatever effect can be ascribed to plastics has been more than offset," said Michael Renner, a senior researcher for Worldwatch.

Renner thinks an emphasis on particular parts misses the bigger picture: the total size and power of new vehicles have been going in the "wrong direction" for many years. He does agree, however, that "the continued development of lightweight materials will still be critical."

Even if plastics can mitigate some of the fuel use, they are not exactly loved by environmentalists.

"The production of plastics is of course highly energy-intensive and polluting," Renner said. But he added that the same is true for steel and aluminum production.

One concern is that plastic recycling is not as fully developed as metal recycling of vehicle parts. Composite plastics are especially hard to separate and thus make available for re-use.

However, to Schanssema's thinking, this would not justify making cars from heavier metal parts,

Besides reducing weight, plastics help to streamline the shape of vehicles, improve the performance of tires and increase the safety of windshields and fuel tanks.

Still, there are ideas for making plastics more sustainable. One way might be to use bio-degradable plastics, or ones that come from renewable resources, such as corn or sugarcane.

Another option is to recover the energy from discarded plastic parts. The company Plas2fuel, based in Washington state, can make a gallon of oil from melting down 8 pounds of plastic. In March, this process was used by Oregon-based Agri-Plas to turn plastic waste into 8,200 gallons of oil.

Ironically, then, the plastic in electric cars and fuel cell vehicles might one day be recycled into oil that could be burned in gasoline-powered cars.