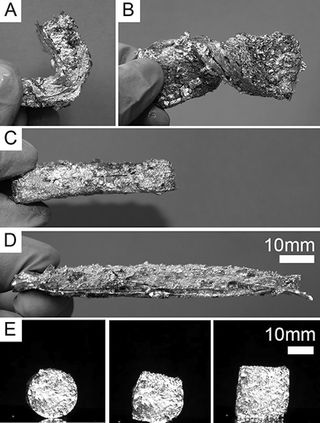 A new metal-foam hybrid material can be heated in order to change its shape, then cooled to regain stiffness.
(Image: © Rob Shepherd group)

Miniature drones that can morph from flying machines into underwater vehicles by changing the shape of their wings in midair could be a step closer, thanks to a new material that acts as a hybrid between stiff metal and spongy foam.

Designed by engineers from Cornell University, in Ithaca, New York, and with funding from the U.S. Air Force, the composite material consists partly of silicone and partly of a metal with a melting point of 144 degrees Fahrenheit (62 degrees Celsius). As a result, researchers could build machines that take advantage of both materials’ properties, the scientists said.

"The driving vision behind this is the puffin," said study first author Ilse Van Meerbeek, a Cornell graduate student in the field of mechanical engineering. "It can fly through the air then shorten its wings and dive into the water. Without this ability its wings would break." [The 6 Strangest Robots Ever Created]

At low temperatures, the mechanical properties of the metal come to the fore, making the material rigid and strong, the scientists said. But, when heated, the metal melts and the foam becomes soft and elastic like silicone. Then, the material can be twisted and bent into new shapes that it will hold when the metal-foam hybrid cools back down. Reheating the material lets it return to its original shape without any loss of strength, they added.

"The Air Force is interested, because they want to be able to develop morphing wings for small aircraft," she told Live Science. "Being able to do this without moving parts is appealing because then fewer parts can break."

Materials that "remember" their shape have become a popular field of research because they have an array of applications, ranging from self-assembling miniature robots to medical implants. But most materials investigated so far have been flat structures that fold up like paper origami to create more complex configurations, Van Meerbeek said.

"Ours is a fully 3D material that can be both formed in 3D and morphed in 3D," she added.

In a new paper published online Feb. 12 in the journal Advanced Materials, the researchers described how the composite was created, by dipping the silicone foam into the molten metal and then placing it in a vacuum so the metal is sucked into the foam’s pores as the air is removed.

The material’s structure not only allows it to shapeshift, but also self-assemble and self-heal. If two pieces of the material are put side-by-side and heated, the metal melts and fuses the two pieces together with only a slight loss in mechanical strength, the researchers said.

While Van Meerbeek did not test how many heating cycles the material could withstand, she said it showed no loss of strength or elasticity after five cycles and in theory, it should tolerate far more.

But apart from aerospace applications, the material could also prove useful for soft robotics – the primary focus of the lab at Cornell that conducted the research.

"The downside of soft robots is they're only able to exert so much force because they're soft," Van Meerbeek said. "Being able to convert from soft to a stiff material is what we are trying to move towards."

To demonstrate the possibilities, the team built a pneumatically powered soft tentacle with a core made from the new composite. When heated, the tentacle could move freely, but when cooled it became strong and stiff. [Top 10 Inventions that Changed the World]

The ability for a material to switch between soft and rigid could allow a robotic gripper to handle delicate items, but still lift them if they are heavy, Van Meerbeek said, or allow an "Inspector Gadget"-style surgical implement that changes shape on demand to carry out multiple functions.

"If soft robots are going to have the same versatility as natural organisms then they need materials that can spontaneously change not just their shape but also their mechanical rigidity," said Carmel Majidi, an associate professor of mechanical engineering at Carnegie Mellon University in Pittsburgh, who wasn't involved with the new study but has also worked with low-melting point metals for soft robotics. "Efforts like this study are a step towards that goal."

Tuning the size of the foam's pores should also allow the team to make the material stiffer or more flexible, but Van Meerbeek concedes it is probably not strong enough for major structural parts yet.

"Our current hypothesis is that the silicone foam is not fully permeated by the metal, so there are still some cavities that could be filled," Van Meerbeek said. "And the grains of metal are not as well contacted as they could be. Using 3D printing would allow much better contact and interpenetration and that would allow a much stiffer material able to bear greater loads."

The researchers also plan to experiment with thermoplastics that exhibit similar properties to the metal component of the foam. While the material would likely withstand fewer heating cycles, Van Meerbeek said it would be lighter — a major benefit for soft robotics systems with limited mechanical force.