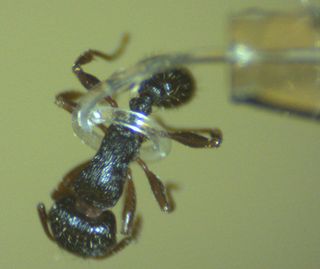 Tiny soft robotic tentacles might be ideal for delicate microscopic surgery, say researchers, who were able to use the teensy "limbs" to pick up an ant without damaging its body.

In experiments, these new tentacles also wrapped around other tiny items — such as fish eggs, which deform and burst easily when handled by hard tweezers — without damaging them, scientists added.

Conventional robots are built from rigid parts, making them vulnerable to harm from bumps, scrapes, twists and falls, as well as preventing them from wriggling past obstacles. Increasingly, researchers are  developing robots made from soft, elastic plastic and rubber and inspired by octopuses, worms and starfish. These soft robots are resistant to many of the kinds of damage, and can overcome many of the obstacles, which can impair hard robots. [Photos: Amazing Tech Inspired by the Octopus]

However, miniaturizing soft robots for tiny applications has proved challenging. Soft robots typically move with the aid of compressed air that is forced in and out of many tiny pneumatic channels running through their limbs, essentially inflating and deflating like balloons. However, scientists have faced challenges when trying to create microscopic versions of such limbs. For example, the hollow channels in soft robots are often created by dissolving away unwanted matter, but ensuring that all such material gets dissolved is a complicated task at microscopic scales.

These new robot tentacles can grab and squeeze items by moving in a spiraling manner, much like elephant trunks, octopus arms, plant tendrils and monkey tails.

The microscopic tubes are 5 to 8 millimeters long, about the length of the average red ant. Each tube has walls 8 to 32 microns thick and hollow channels 100 to 125 microns wide. In comparison, the average width of a human hair is about 100 microns.

To make these microscopic tubes, the researchers dipped thin wires or optical fibers in liquid silicone rubber and then stripped the hollow pipes off the rods once the fluid had solidified. The researchers inflated and deflated the tubes using syringes as pumps.

The hollow channel inside each tube did not run straight down its middle — rather, by letting gravity pull on the silicone rubber as it solidified, one side of each tube was thicker than the other. When air is pumped into each tube, the thin side will bend more than the thick side, allowing the tube to coil.

Ordinarily, these microscopic tubes can only coil once when inflated. However, the scientists augmented the ability of the tubes to flex by adding rings of silicone rubber onto their exteriors that "amplified the single-turn coiling into multi-turn spiraling,"study co-author Jaeyoun Kim, an electrical engineer at Iowa State University, told Live Science.

These new tentacles could pick up and hold an ant whose waist was about 400 microns wide without damaging its body. The researchers suggest these tentacles could help safely and delicately manipulate blood vessels or even embryos in minimally invasive surgeries. "The gentle spiraling and scooping motion of our micro-tentacle will definitely help," Kim said.

Kim and his colleagues, Jungwook Paek and Inho Cho, detailed their findings online today (June 11) in the journal Scientific Reports.