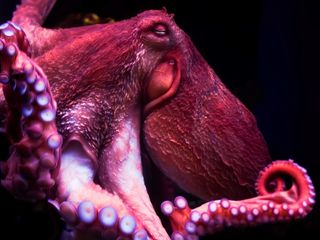 The octopus is inspiring all kinds of technologies, from grasping tentacles and camouflage material to robotic arms and suction cups. Here’s a look at the sophisticated tech that this sea creature has helped unleash in recent years. [Read more about how the octopus has inspired tech innovations]

Engineers from the University of Houston and University of Illinois at Urbana–Champaign made a flexible camouflage system from heat-sensitive dye and light sensors that can automatically match its surroundings.

These self-sealing suction cups designed by U.S. Army researchers for grasping robots are strong enough to hold up a wine bottle.

Researchers tested four fingertip-size prototype suction cups made from a type of polymer that solidifies under UV light.

Harvard University scientists started with a soft color-changing robot two years ago and have made a new untethered version that can withstand fire, water, and being run over by a car.

Researchers at the University of Zurich, in Switzerland, are calculating the dynamics of a sensor-laden arm made from silicone in an effort to make soft interfaces for robots more intelligent.

The robotic limbs can be mounted either on the shoulders or at the waist, the researchers said.

The PoseiDRONE project is developing an octopus-type robot made from up to 90 percent soft materials for undertaking risky underwater jobs.

The European STIFF-FLOP project is working on a soft, flexible endoscope inspired by octopus arms and elephant trunks that could be used for minimally invasive surgery.