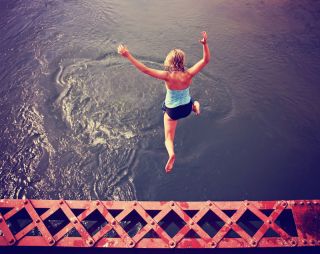 Some people's brain structures may lower their inhibitions and make it easier for them to engage in risky or impulsive behavior, according to a new study.

Researchers examined more than 1,200 healthy young adults with no history of psychiatric disorders or substance dependence. They found that the participants who were more inclined to act impulsively or to seek thrills had a thinner cortex — the wrinkly outer layer of gray matter — around the brain regions involved in decision making and self-control.

This thinner cortex may not only compromise people's decision-making process, but also may predispose them to substance abuse, the researchers said.

"The findings allow us to have a better understanding of how normal variation in brain anatomy in the general population might bias both temperamental characteristics and health behaviors," said Avram Holmes, an assistant professor of psychology and psychiatry at Yale University in New Haven, Connecticut, who led the study. [10 Things You Didn't Know About the Brain]

Neuroscientists are hotly debating how important brain anatomy is to the choices we make in life, both good and bad, Holmes said. Previous research established that although impulsivity and sensation- or thrill-seeking behaviors are distinct from a predisposition to substance abuse, they do have a common origin in the brain regions associated with regulating emotions and behavior: the anterior cingulate and the middle frontal gyrus.

Similarly, research suggests that impulsivity among teenagers — often the poster children for reckless or irrational behavior — may be caused by a mismatch of the maturation phases in various parts of the brain, with regions associated with reward and thrill-seeking dominating decision-making processes.

In the new study, Holmes and colleagues at Harvard University and Massachusetts General Hospital measured the size of numerous brain regions in men and women ages 18 to 35 using magnetic resonance imaging (MRI). These participants also completed questionnaires assessing their need for novel and intense experiences, willingness to take risks and tendency to make rapid decisions, as well as their alcohol, tobacco and caffeine usage.

The researchers found that study participants who reported seeking high levels of stimulation or excitement or a tendency to act on impulse had reduced cortical thickness in brain regions associated with decision making and self-control, particularly in the anterior cingulate and the middle frontal gyrus.

Kristine Beate Walhovd, a professor of neuropsychology at the University of Oslo in Norway who studies brain and behavior across the human life span, noted one strength of this study. "They identify this relationship within non-substance-using participants, implying that these variations are not merely the consequence of individual history of substance use," said Walhovd, who was not involved in the new research.

But thrill seeking and impulsivity are not necessarily bad traits in the context of our ancestors securing food, land or mates, Holmes said. [Top 10 Mysteries of the First Humans]

"Our tendency to engage in sensation-seeking and impulsive behaviors evolved as a function of their influence on survival and reproductive fitness," Holmes told Live Science. "They are not simply synonymous with adverse outcomes. For instance, sensation seeking co-varies with social behavior, social support, physical activity, reproductive opportunities and environmental exploration. There is likely no universally optimal temperament."

Holmes added that, in particular, his team's findings highlight the need to further examine how variations in brain anatomy may affect behaviors associated with the risk of psychiatric illness and poor health outcomes.