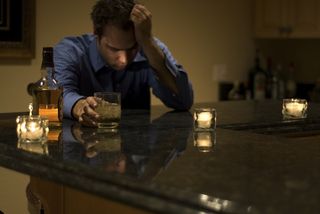 Addiction and impulsivity have a genetic link in men, according to a new study.

The gene, a snippet of DNA called NRXN3, has previously been linked to nicotine dependence, as well as alcohol dependence, opiate addiction and obesity. The new research suggests a common denominator of impulsivity underlies all of these troubles.

"The other studies basically showed the NRXN3 seems to be associated with some addictions and with obesity," said study researcher Scott Stoltenberg, a psychologist at the University of Nebraska, Lincoln. But our study is really the first to flesh out the mechanism by looking at behavioral control, looking at impulsivity."

The connection between single genes and behavior is complex, to say the least, and NRXN3's connection to impulsive and addictive behaviors is not a "straightforward, simple story," Stoltenberg told LiveScience.

Nor is NRXN3 the only gene linked to impulsivity. A 2010 study found a different gene mutation associated with impulsive, violent behavior in Finnish men. Yet another gene variant found in 2006 was linked to impulsive aggression. And a single "thrill-seeking" gene has been linked to everything from a tendency toward promiscuity to a love of horror films.

In no case, however, do these genes doom one to a violent life full of sex and horror films (though some might wish they did). Environment and multiple genes act together to build personality, and there's no straight lines to be drawn from single genes to certain behaviors, Stoltenberg said.

"You almost can't paint a complicated enough picture of how genes are associated with behaviors," he said. "There are a lot of factors out there that influence our behaviors, and genes are just one of them."

Nonetheless, genes can raise the risk of falling into certain traps like addiction and obesity. In some cases, Stoltenberg said, genes directly make people more susceptible to addiction to a certain substance. In other cases, genes play on maladaptive behaviors, such as impulsivity, that make addiction more likely.

To figure out why NRXN3 kept popping up in relation to addiction and obesity, Stoltenberg and his colleagues recruited 439 white, college-age volunteers to offer up a genetic sample in the form of an inner-cheek swab. The researchers used only Caucasian volunteers to prevent race-based genetic differences from skewing the results.

The volunteers filled out questionnaires about their personality as well as their use of alcohol, tobacco and other drugs. They also completed a task in which they estimated the progress of time, a test that measures patience versus impulsivity.

The results revealed two intriguing and somewhat mysterious links between NRXN3 and behavior. In men, but not women, having a certain variant of NRXN3 increased the risk of problems with alcohol by 2.5 times. (The researchers didn't formally diagnose alcoholism, but relied on red flag answers in the questionnaires to determine who struggled with alcohol abuse.)

NRXN3 is a gene associated with maintaining the connections between brain cells, Stoltenberg said. The gene variant associated with impulsivity represents a change on a promoter region of the gene, meaning it's a part of the gene that controls how a certain protein gets made, not the structure of the protein itself. The amount of the protein that gets made could end up influencing the brain, and thus behavior, Stoltenberg said.

"It doesn't change the structure of the protein, but it might change whether you get a lot of it or a little bit of it," he said.

Stoltenberg and his colleagues, who will report their results in an upcoming issue of the journal Drug and Alcohol Dependence, aren't sure why the gene is associated with impulsivity and addiction in men but not women.

"I don't have a ready explanation for that, other than there are differences in rates of alcohol problems in men and women, and also men and women differ in biology," Stoltenberg said. The gender-based finding highlights the complexity of behavioral genetics research, he said.

While the study cements NRXN3's role in addiction and impulsivity, Stoltenberg said much more research is needed to understand, for example, why one variant influences impulsivity and another is linked to alcoholism.

"It seems that genetic variation in NRXN3 plays a role in these behavioral problems," Stoltenberg said. "But I think we're pretty far from having a complete understanding of it."