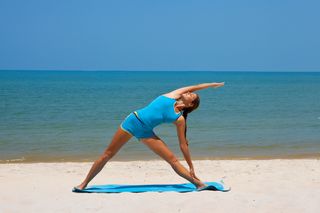 For young adults who have experienced severe mental health disorders, exercise may help reduce the severity of their symptoms, a new, small study suggests.

In the study, researchers looked at 38 adults, ages 18 to 35, who had experienced an episode of psychosis — a serious mental disorder in which a person loses touch with reality and may experience delusions and hallucinations. All of the people were receiving antipsychotic medications and mental health care through early-intervention mental health services in England.

The researchers assigned 31 of the people to participate in a 10-week exercise program. The remaining seven were not assigned to participate in such a program. (The groups were uneven in size because the researchers originally set up the study to assess how practical it would be to run an exercise program for people with psychosis; the added the control group later when they decided to look at the effectiveness of the program by comparing people who were exercising with those who were not.)

The researchers found that the people who participated in the exercise program experienced a 27 percent decrease in the overall severity and frequency of their symptoms over the 10 weeks, on average. In comparison, the severity and frequency of symptoms among the people in the control group decreased by nearly 8 percent, on average, over the same period of time, they found. [5 Controversial Mental Health Treatments]

"I would highly recommend exercise as an intervention for early psychosis," said lead study author Joseph Firth, a postgraduate research student in the Institute of Brain, Behavior and Mental Health at the University of Manchester in England. "It can help with both the physical health and psychosocial recovery of the patient," which are aspects of psychosis that are often left untreated, or can even be worsened, by antipsychotic medications, he said.

In the study, the people in the exercise intervention group were assigned to work out for at least 90 minutes per week for 10 weeks, but they ended up exercising for 107 minutes per week, on average, the researchers found.

It is not clear why exercise may benefit young people with early psychosis, but several potential mechanisms may be involved, the researchers said. In a previous study, for example, the same researchers found that exercise helped young people with psychosis re-direct their attention from the disturbing thoughts and voices that might have usually troubled them, Firth told Live Science.

"Exercise was also said to produce an energizing, 'feel good' effect for the young people, helping them to overcome the motivational deficits associated with psychosis," he said.

But Firth stressed that merely telling young people with psychosis to exercise more often is not enough to increase their activity, or allow them to experience the benefits shown in the new study. [How to Stick to an Exercise Routine]

Instead, the patients should exercise with specially trained professionals, similar to the ways in which other forms of therapy are delivered, he said.

The new study was published Monday (March 14) in the journal Early Intervention in Psychiatry.