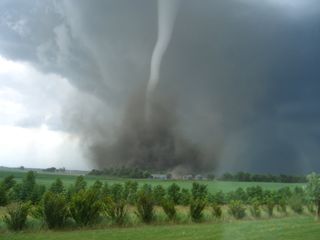 Tornado clusters are outbreaks of twisters that span several days. One terrifying example is the April 25-28 outbreak in 2011, when some 350 tornadoes ripped across the south-central United States, killing more than 300 people.

Outbreaks are responsible for 79 percent of tornado-related fatalities, said Michael Tippett, a climate and weather researcher at the School of Applied Science and Engineering and the Data Science Institute, both at Columbia University in New York. [Tornado Chasers: See Spinning Storms Up-Close (Photos)]

Tippett's new research shows the number of tornadoes per outbreak is increasing. The analysis also discovered a 4-fold increase in the chance of extreme outbreaks — when hundreds of tornadoes spawn in storms.

The researchers analyzed National Oceanic and Atmospheric Administration (NOAA) tornado records from 1954 to 2014. Outbreaks were counted when six or more EF-1 tornadoes started within 6 hours of each other, no matter the location. The scientists calculated the average number of tornadoes per outbreak, as well as variability— swings between high and low numbers of twisters — which relates to the chance of extreme outbreaks..

The findings were published Feb. 29 in the journal Nature Communications. The study was coauthored by Joel Cohen, a mathematical population biologist and head of the Laboratory of Populations at Rockefeller University in New York and Columbia's Earth Institute.

"These discoveries suggest that the risks from tornado outbreaks are rising far faster than previously recognized," Cohen told Live Science in an email interview.

The researchers analyzed National Oceanic and Atmospheric Administration (NOAA) tornado records from 1954 to 2014. Outbreaks were counted when six or more EF-1 tornadoes started within six hours of each other, no matter the location. They calculated the average tornadoes per outbreak, as well as variability — swings between high and low numbers of twisters.

The total number of tornadoes (rated EF-1 and above) per year remained steady since the 1950s, the study reported. The Enhanced Fujita scale, or EF scale, ranks tornadoes based on wind speeds and damage. A tornado with wind speeds between 86 and 110 mph (138 and 177 km/h) is usually rated an EF-1. The highest rating is an EF-5. [See the Tornado Damage Scale in Images]

However, the average number of tornadoes per outbreak rose from about 10 in the 1950s to about 15 in the past decade. The variability around that average rose four times faster. This statistical link, known as Taylor's power law, has been observed in other fields but never before with severe weather, Tippett told Live Science in an email interview.

The new findings are consistent with several recent studies that suggest U.S. tornadoes are becoming more likely to strike in clusters. A NOAA study, published in October 2014 in the journal Science, showed a rise in the number of days with multiple reported tornadoes. Another study, published in July 2014 in the journal Climate Dynamics, found a similar clustering of tornadoes.

The researchers said they can't blame climate change for the uptick in tornado outbreaks. However, the warming planet could be shifting weather patterns across the United States and triggering more tornadoes. For instance, extreme weather systems that spawn storms are now more likely to get stuck in one place for several days. Increasing warmth may also boost tornado outbreaks by sparking unstable weather earlier in the year.

"We want to know what in the climate system is driving these changes. Some have implicated climate change. We think such a conclusion is premature, and further study is needed," Tippett said.