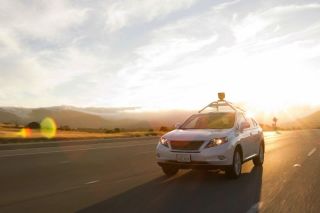 One of Google's self-driving cars crashed into a bus last month, marking the first time a vehicle in the company's robotic fleet caused a collision, according to an accident report filed to the California Department of Motor Vehicles (DMV).

The report says the crash took place on Feb. 14 in Mountain View, California, between Google's self-driving Lexus RX450h and a public transit bus. The collision occurred after Google's autonomous vehicle (AV) came to a stop and tried to maneuver around sandbags that had been positioned around a storm drain, according to the accident report.

The robotic vehicle was traveling at less than 2 mph (3.2 km/h) and the bus was traveling at about 15 mph (24 km/h) at the time of the crash, according to the report. There were no reported injuries, but the robotic Lexus RX450h sustained damage to the left front fender, left front wheel and one of the sensors on the driver's side, the report said.

"Our self-driving cars spend a lot of time on El Camino Real, a wide boulevard of three lands in each direction that runs through Google's hometown of Mountain View and up the peninsula along San Francisco Bay," Google said in a statement provided to Engadget. "With hundreds of sets of traffic lights and hundreds more intersections, this busy and historic artery has helped us learn a lot over the years. And on Valentine's Day we ran into a tricky set of circumstances on El Camino that's helped us improve an important skill for navigating similar roads."

A study published in October 2015 by the University of Michigan's Transportation Research Institute found that self-driving cars have a higher crash rate per million miles traveled than traditional cars, though the overall severity of crash-related injuries with autonomous vehicles was found to be lower than that of regular vehicles. At the time of the study, though, no self-driving cars were found to be at fault for the crashes they were involved in. But, it's important to remember that these findings are preliminary, the researchers said, because self-driving vehicles have spent significantly less time on the road — about 1.2 million miles (1.9 million km) compared with the 3 trillion miles (4.8 trillion km) logged annually in the United States by conventional vehicles.

"We've now reviewed this incident (and thousands of variations on it) in our simulator in detail and made refinements to our software," Google said in its statement to Engadget. "From now on, our cars will more deeply understand that buses (and other large vehicles) are less likely to yield to us than other types of vehicles, and we hope to handle situations like this more gracefully in the future."