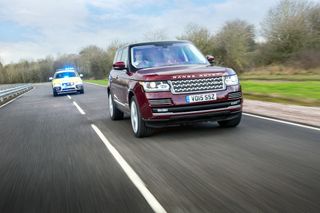 Self-driving cars may represent an important achievement in the fields of artificial intelligence and robotics, but one car manufacturer is hoping to develop new technologies that could help these autonomous machines drive less like robots and more like, well, humans.

British automotive company Jaguar Land Rover is taking part in a new research project, dubbed MOVE-UK, to foster the development of safer and more effective autonomous cars. The initiative aims to study how human drivers behave in real-life situations, such as when roads are congested, when weather is bad or when routes are diverted because of construction.

"Customers are much more likely to accept highly automated and fully autonomous vehicles if the car reacts in the same way as the driver," Wolfgang Epple, director of research and technology for Jaguar Land Rover, said in a statement. "By understanding and measuring positive driving behaviors, we can ensure that an autonomous Jaguar of Land Rover of the future will not simply perform a robotic function." [Photos: The Robotic Evolution of Self-Driving Cars]

As part of the new project, Jaguar Land Rover employees will drive a fleet of cars each day through Greenwich, a borough in southeast London. Sensors in the cars will record how the human drivers behave and make decisions in a variety of real-world driving situations. For instance, the project aims to monitor relatively mundane things like how drivers prepare to merge into traffic, plus more complex processes like how motorists cope with making way for an ambulance or police car when there's heavy traffic.

"To successfully introduce autonomous cars, we actually need to focus more on the driver than ever before," Epple said. "Understanding how drivers react to a range of very dynamic and random situations in the real world is essential if we want drivers to embrace autonomous cars in the future."

The main goal is to ensure that future motorists "trust" autonomous vehicles, he added.

"Ultimately we want to be able to give drivers the choice of an engaged or autonomous drive," Epple said. "If drivers have confidence in the automation, they will seamlessly flick from one mode to the other. Autonomous mode will help with any challenging, or less stimulating activities on the journey, like parking or driving in heavy traffic. If this automated experience feels natural and safe, the driver will be able to genuinely relax and will be happy to let the car take control."