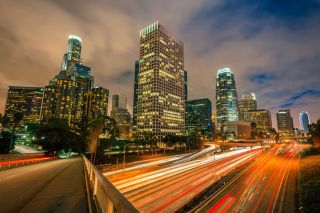 California is giving New York a run for which city is more environmentally friendly.
(Image: © Shutterstock)

Jeremy Deaton writes about the science, policy, and politics of climate and energy for Nexus Media. You can follow him at @deaton_jeremy. Deaton contributed this article, a response to "10 Reasons NY is 'Greener' than California" to Live Science's Expert Voices: Op-Ed & Insights.

"Go West, young man," wrote Horace Greeley. "No, seriously. They have burritos over there." When Greeley penned those words (the first few, anyway), he fired the first shot in a bicoastal battle for supremacy that still rages today. Some young Americans did indeed head west, to California, where they enjoyed surfing, sunshine and salsa. Others stayed east, in New York. I assume they went into banking. From then on, it was New York versus California. Knicks versus Lakers. Bagels versus burritos.

A new front has opened up in this ongoing war. Both California and New York are tackling big problems like climate change, air pollution, safe transit and access to renewable energy. But while the Golden State sails to a greener future on a tide of cutting-edge clean-energy technology, New York is caught in the doldrums, struggling to catch up.

Here are 10 reasons why West is best.

Don't like paying for gas? Want to get an electric car? Move to California. ChargePoint, a network of electric-vehicle charging stations, put out a list of the best places to drive such a car. The results speak for themselves. Three of the top four regions are in California: the Bay Area, Los Angeles and San Diego. New York didn't even crack the top 10. Californians are paving the way for electric cars and trucks. In 2012, California Gov. Jerry Brown issued an executive order to fund the construction of 200 fast-charging stations and 10,000 plug-in units across the state. [The Energy Debates: Electric Cars ]

Can't afford an electric car? Try an electric bus! The Los Angeles County Metropolitan Transportation Authority (LA Metro) recently became the first major transit property in the country to start upgrading to an all-electric fleet. In April, LA Metro rolled out its first five electric buses, with more to come. At last, Angelinos can re-enact the final scene of "The Graduate" without the din of an internal combustion engine to muddy "The Sound of Silence."

Californians know that wind is for more than caressing your golden locks while you cruise down Sunset Boulevard. The Golden State is churning out roughly four times as much wind power as New York, despite having just twice as many residents. California ranks as the No. 2 state for wind-generating capacity, according to the U.S. Department of Energy. Wind-rich New York doesn't even break the top 10.

Californians have long associated sunshine with warmth, tanning and anthropomorphic raisins, but now Golden Staters are also looking to the sun to generate electricity. Today, the solar-generating capacity of California dwarfs that of every other state, including New York, according to the Solar Energy Industries Association. Observers can expect California to widen its lead. In October, Gov. Brown signed a law requiring the state to generate half of its energy from clean sources like solar by 2030.

It should come as no surprise that the state at the forefront of solar power is also leading the country in venture capital funding for green technology. Whether you're electric car magnate Elon Musk or solar technology magnate Elon Musk, you know that California is the best place to hunt for investor cash. In 2014, California accrued roughly half of all U.S. venture capital dollars for clean technology, upward of $2.5 billion, according the Clean Edge 2015 U.S. Clean Tech Leadership Index. New York barely made the list of top 10 states — anyone else seeing a trend here?

With the ongoing drought out West, water conservation has become a moral mission. Californians have resorted to"Game of Thrones"-style shaming for water wasters and put additional effort into saving energy. According to the U.S. Energy Information Administration estimate of state-by-state per-capita residential energy use, Californians consume less energy at home than do residents of nearly every other state, including New York. Now, California is mandating that homes and businesses double their energy efficiency by 2030.

This fall, the NY subway system landed a supporting role in a viral video of a rat dragging a slice of pizza into an underground station. That was fun, but while New York City transit authorities test out rodent-powered pizza transport, LA Metro is experimenting with placing wind turbines along subway tracks to produce power from the wind moving trains create. No news yet on how this technology might be implemented, but it's a promising development that wind produced by underground trains could be used to generate more than just iconic moments with 1950s starlets.

Forget what you've heard about fixie-bound Brooklynites; New York isn't the place for cyclists. According to a report from the League of American Bicyclists, California ranks among the most bike-friendly states in the nation (8th out of 50). New York came in at a pitiable 29th. California's success is due in large part to investments made in bike infrastructure. In 2014, Gov. Brown signed into law legislation that encourages the construction of protected bike lanes and bike paths.

Las Vegas may not be the most environmentally friendly city on the planet, but the way there is about the get a whole lot greener. If you live in Los Angeles, you're no stranger to the spur-of-the-moment Friday-night trip to Vegas. You're probably also no stranger to the full-of-regret Sunday afternoon drive home. Soon, that drive may be a thing of the past. In September, XpressWest and China Railway International USA announced a joint venture to build 230 miles (370 kilometers) of high-speed rail connecting LA to Las Vegas. It won't be long before you can nurse your hangover at 150 mph (240 km/h) without worrying about the radiator overheating. [What Are the World's Fastest Trains? ]

Is there hope for the Empire State? Of course. Both California and New York are aiming to lower greenhouse gas pollution to 80 percent below 1990 levels by 2050. The two states will remain at the forefront of the clean energy revolution, and their rivalry will continue to push them toward their shared goal: fostering cities that are the best places in the world to live, work, play and write songs about. Whether California or New York comes out ahead, in the competition between East and West, everybody wins.