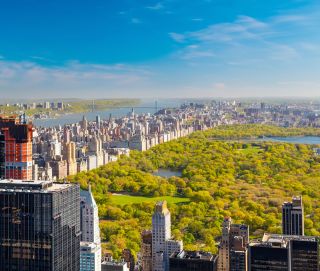 Phil Newell writes on the intersection of climate, science and clean energy for Nexus Media. Newell contributed this article, a response to "10 Reasons California Is 'Greener' Than New York," to Live Science's Expert Voices: Op-Ed & Insights.

With its ample sunshine and eco-friendly reputation, California does provide New York with some stiff competition when it comes to doing what's right for the environment. But while Cali may have the, like, totally organic-free-range-vegan-gluten-free reputation, New York has done more to lead the way to a cleaner future. With its no-nonsense attitude and nose-to-the-grindstone work ethic, New York has been turning the Golden State green (with envy) by making serious greenbacks and by doing a great job of going green.

In December 2014, the New York State Department of Environmental Conservation published its report on fracking. It provided all of the reasons necessary for Gov. Andrew Cuomo to ban fracking in the state of New York — something activists in California are still hoping Gov. Jerry Brown will do, as well. From polluting the air, to polluting our water, to warming our climate, to potentially causing earthquakes, the report was clear that fracking is a significant threat to health and the environment. But maybe Cuomo was just worried about making the Hulk angry.

To its credit, California is trying to ramp up electric-vehicle (EV) use — which is great, since the electricity that powers them in Cali is pretty clean. (Elsewhere, where coal powers the grid, the issue's less clear-cut.) But California has to go big on EVs because the state is utterly dependent on cars, whereas New York City has one of the biggest public transit systems in the world. The Metropolitan Transportation Authority keeps 700,000 cars off the road every day. As writer David Owen, for Yale Environment 360, noted, New York's per capita gas consumption is equal to the national average — in 1920! And while California may brag about its clean buses, the fact is that eight times as many New Yorkers take public transit , bikes or walk to work as Angelinos.

Cali may be installing more solar, but once SolarCity's new Gigafactory is running this year, the panels will be made in Buffalo, New York! The factory will be more than a million square feet, making it the largest facility of its kind not just in the United States but the entire Western Hemisphere. Once fully operational, it will pump out as many as 10,000 solar panels a day and will create an estimated 5,000 jobs across the state.

According to the U.S. Energy Information Administration (EIA), New York state has the lowest per capita emissions in the country (except for Washington, D.C., which doesn't really count because it's not officially a state, despite how much the residents may resent that.) This means that while New York is home to a little more than 6 percent of the U.S. population, it emits a little less than 3 percent of the country's greenhouse gases and consumes only 1 percent of the nation's industrial power. So California's efforts at green energy are commendable — but they're still playing catch-up to the Empire State.

Again, New York beats California in actually cutting emissions. According to the EIA, New York achieved the greatest absolute decline in fossil fuel emissions between 2000 and 2013, shrinking its footprint by a full 25 percent for a total of 52 million metric tons of carbon dioxide emissions cut. How much is 52 million metric tons of carbon dioxide? That's about a trillion miles driven in an SUV that gets 17 miles per gallon, which is a lot, even for a Californian!

6) New York gets its money's worth

In addition to making the biggest cuts and leaving the smallest footprints, New York also proves that a thriving economy doesn't need to be dirty. New York has the most energy-efficient economy in the country, boasting the best GDP-to-emissions ratio (how much wealth is produced per amount of greenhouse gasses emitted) of any state, according to the EIA. California is close, but New York still wins, producing half the emissions per GDP as the U.S. average.

When the People's Climate March became the largest climate action in history, with more than 300,000 participants, its home base wasn't California; it was New York City. That's because New York is home to a broad coalition of activists from diverse backgrounds and with varied goals, all of which tie into climate change. Out of that success, the NY Renews coalition has emerged as a powerful force for change — the good kind, not the climate kind. California may have activists, but apparently, they're not as good at drawing a crowd as New York!

Heating, cooling and lighting New York City are big tasks, and account for almost three-quarters of the city's emissions. So, Mayor Bill de Blasio's Built to Last policy, which will retrofit 3,000 city-owned buildings to be more energy efficient and spur improvements in private ones, is a huge step to a cleaner future. That's why C40, a cities-based initiative for climate action, gave New York the Building Energy Efficiency Award last December. Over the next 10 years, NYC will spend a billion dollars on making buildings more efficient, saving 3.4 million metric tons of emissions a year — the equivalent of taking more than 700,000 vehicles off the road.

To replace fossil fuels in New York's power mix, Cuomo has launched a whopping $5 billion for clean energy investments. That's huge — equivalent to the total amount the U.S. federal government spends on all energy research and development, according to a report from the American Energy Innovation Council. So, that size investment would not only secure New York's place as a clean energy leader, but by investing so much in renewables, the state would go a long way in helping to make the technologies cheaper and easier for others to adopt.

It's obvious, then, that New York is greener than California. New York's people have smaller carbon footprints, the state's electricity is cleaner and its buildings are just plain better. But please, don't paint us as hippie greens. We're perfectly happy letting California have the hippy dippy reputation — we're too busy getting the real work done.

Either way, with two of the biggest economies in the US ramping up clean energy efforts, it’s clear that the renewable energy revolution is underway. By bringing prices down as clean tech scales up, regardless of which state goes further faster, this beef benefits all of us.