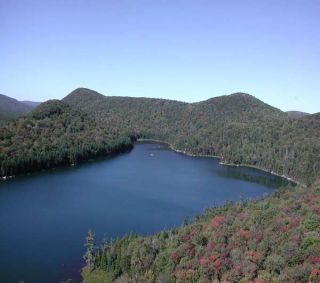 Chuck Boylen and his crew of six had been hiking for around two hours, surrounded by nothing but the tree-lined, towering Adirondack Mountains, when they reached the wide-open space of Brooktrout Lake.

"You can just feel the remoteness," said Boylen, a biology professor at Rensselaer Polytechnic University in New York, who is part of a multi-organizational team that has been studying the effects of air pollution on this and other lakes in the Adirondacks every summer for the last 16 years.

The goal of the research is to determine how the Clean Air Act, passed in 1990, has affected the lakes in the Adirondacks, many of which had become so acidic they no longer had any fish. The fish killer was sulfur dioxide, which for decades had been released from various industries, before undergoing chemical reactions in the atmosphere and combining with water droplets to create acid rain.

The research by Boylen and his team will be the most comprehensive long-term study of how acidification affects lake ecosystems to date, and will also look at how those ecosystems recover, if in fact they do.

"There hasn't been a study evaluating the changes in the chemistry together with the biota, over a long period of time," said study team member Sandra Nierzwicki-Bauer, director of the Darrin Fresh Water Institute at Rensselaer.

The studies show that the effects on the Adirondacks lakes were severe in some cases, but that there's reason to hope for some recovery.

Life in the mountains

The Adirondacks are in the northernmost part of New York. The region covers 6 million acres (2.4 million hectares), containing over 3,000 lakes and ponds, 46 peaks over 4,000 feet (1,220 meters), and 2,000 miles (3,200 kilometers) of hiking trails. It is the largest area of forest in the eastern United States, with a diverse mix of trees, including beech, maple, oak, hemlock, white pine and fir.

Studying the lakes is no small feat. The crew makes its base at a research station near Lake George in the southeast corner of the park. But, because of the enormity of the park, many of the lakes they study are a two-hour drive away, much of it over winding, dirt roads. If the crew is lucky, the road will lead all the way to the lake, but if not, as in the case of Brooktrout Lake, they will often have to hike a good 6 miles (9.6 km) through dense forest to reach the lake.

"We have to carry our canoe, sampling gear, batteries the size of car batteries to fuel our pump," Boylen told OurAmazingPlanet. "Sometimes one lake is all we can get done in a day."

Once they reach the lake, the team paddles out to the middle of it to take water samples. A long hose snakes out of the canoe, collecting water at all different depths.

Despite the hard work, the remoteness and beauty of the lakes is what makes the work so rewarding, Boylen said. "Each [lake] is a gem," he said. "As an environmentalist, it's an exciting feeling being out in the wild and trying to understand nature and ecology."

Nierzwicki-Bauer agreed: "If these natural resources no longer exist, people will no longer have the ability to visit and enjoy the beauty of the natural environment," she said.

The team published the results of a 12-year analysis of 30 Adirondacks lakes this month in the journal Environmental Science and Technology. The researchers evaluated acidity in 30 different lakes in the Adirondacks in order to determine how air pollution has affected the fish, bacteria, phytoplankton and other aquatic life that reside in the lakes.

They determined that a drop in one unit of pH corresponds with a loss of approximately four fish and plant species. (The pH of liquids is measured on a 0-14 scale, with 0 being the most acidic and 14 being the most basic. Pure water has a pH of 7.) They also created a database of species they classified as either acid-sensitive, acid-tolerant or acid-resistant.

"The hope is that it will be a versatile system in assessing ecosystem recovery," Nierzwicki-Bauer said.

The Adirondack lakes are some of the most impacted by acidification. And so understanding the impact of acidification on those ecosystems, and how and if the ecosystem recovers after the pollutant is removed, could provide important insights into other lake ecosystems.

"When you have pollutants, you start to lose biodiversity, which is difficult at best to ever gain back," Nierzwicki-Bauer told OurAmazingPlanet.

The good news is that the lakes are showing some signs of recovery — all of them have become less acidic over the 12 years of study. While none have fully recovered, Brooktrout Lake, which had become fishless is now at the point where the scientists have been able to reintroduce fish.

"Now we're studying what happens when you're able to reintroduce fish," Nierzwicki-Bauer said.