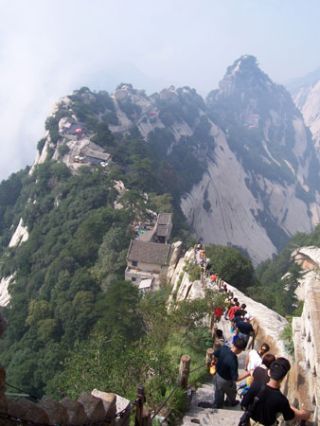 Pilgrimage to the temples at the top of haze shrouded Mount Hua. The meteorological observatory is just above the temple.
(Image: © Science)

Air pollution from vehicles, industry and the burning of plant material can choke off the formation of precipitation in some semi-arid mountainous areas, threatening critical water sources, a new study finds.

Aerosols, or tiny particles suspended in the air, could potentially affect the climate by reflecting light back to space and therefore cooling the surface below or altering the formation process of clouds and precipitation.

Because aerosol measurements have only been collected reliably more recently, scientists have been unable to conclusively demonstrate the effects of aerosols on precipitation, but this new study did just that using meteorological data extending back to the 1950s and collected on a mountain in central China.

Water vapor forms cloud droplets by condensing onto aerosols. These droplets collide until they form large droplets and eventually become heavy enough to fall as rain. Because there is only a certain amount of water vapor in the air, when the air is loaded with more small particles, less water condenses onto each particle and it takes longer for them to collide into a big enough droplet to form rain.

"The smaller they are, the longer it takes for them to coalesce into raindrops," said Daniel Rosenfeld of The Hebrew University in Jerusalem.

Because the clouds are short-lived, evaporating as they descend the mountain, the tiny droplets evaporate before they can become rain.

Rosenfeld and his colleagues quantified this effect on Mt. Hua in Central China, where meteorological observations have been maintained for the past 50 years. The scientists inferred aerosol amounts from the visibility measured there (the more particles in the air, the lower the visibility is--the shorter the distance you can see clearly).

The team then compared rainfall at the mountaintop to that in nearby lowland areas, and found that the lower the visibility (or the more aerosols), the less rain fell in the mountainous area. In fact, they found that the average precipitation decreased by 20 percent in the last 50 years. The research is detailed in the March 9 issue of the journal Science.

In this area of China, mountain rains are a major source of waters for rivers, like the Yellow River (the second longest river in China and the seventh longest river in the world), which local people use for irrigation; as pollution increases and causes precipitation to decrease, it will be "compromising a major water source," Rosenfeld said.

This effect has been seen in polluted portions of other mountainous areas, such as the Sierra Nevada range (though not in more pristine parts of the Rockies, such as Oregon). But it is particularly important in Asian countries like India and China because of their rapid industrialization and potable water shortages.

Israel has had problems with precipitation decreases in areas that feed the Jordan River, Rosenfeld said. To combat the problem, the country has been seeding clouds since 1961.

Seeding works by dumping aerosols into clouds to encourage the growth of raindrops. But these aerosols are larger and more hydroscopic, or more eager to grab up water vapor, so cloud droplets grow bigger faster and can turn into rain.

"The precipitative ability of the cloud is quite sensitive to what we put into [it]," Rosenfeld said. "The sensitivity is double-sided."

Paradoxically, air pollution can have the opposite effect in what are called convective clouds and can cause them to produce more rain.

Convective clouds form when solar radiation warms the air and causes it to rise, which in turn causes it to cool and the water vapor in it to condense.

Convective clouds are larger than clouds formed by lifting over mountains-- aerosols still cause smaller cloud droplets to form, but this allows the cloud to persist for longer as raindrops are driven further up into the clouds by updrafts, allowing them to grow more.

Pollution from Asia has been observed to have this effect on storms over the North Pacific.