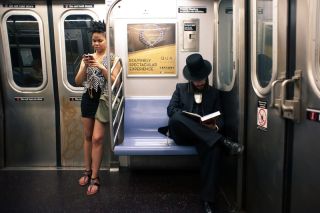 Should they chat? New research suggests that riders of public transit, like this pair in the New York City subway, are happier when they converse rather than sit in isolation.
(Image: © pio3 / Shutterstock.com)

Talking to the stranger in seat 4B on a cross-country flight is often considered one of the torments of air travel, to be avoided at all costs. But new research suggests people are deeply wrong about the misery of striking up conversations on public transit.

Contrary to expectations, people are happier after a conversation with a stranger, the study revealed.

"At least in some cases, people don't seem to be social enough for their own well-being," said study researcher Nicholas Epley, a professor of behavioral science at the University of Chicago Booth School of Business. "They think that sitting in solitude will be more pleasant than engaging in conversation, when, in fact, the opposite is true." [7 Thoughts That Are Bad For You]

Epley, author of the book "Mindwise: How We Understand What Others Think, Feel, Believe and Want" (Knopf, 2014), studies social connection. Humans are social animals, he said, to the extent that having more and stronger friends and family connections is linked with a healthier life.

But in waiting rooms, trains, planes and other public spots, people fail to show their social stripes, Epley told Live Science. During his own commute in Chicago, he sees "highly social animals getting on the train every morning and being remarkably anti-social … They might as well be sitting next to a rock."

Perhaps people know that interacting with a stranger is likely to be less pleasant than sitting in silence, so they choose the latter, Epley said.

Or maybe, just maybe, everybody is wrong about talking to strangers. Maybe it's actually fun.

To find out which is true, Epley and his colleagues recruited real-life commuters at Chicago train stations. They also conducted a series of experiments with bus riders. In some of these experiments, they simply asked people to imagine striking up a conversation on the bus or train. Would it be pleasant? Would they feel happy afterward?

By and large, people said "no," it wouldn't be pleasant, and that such an interaction wouldn't result in a happiness boost. In addition, people guessed, on average, that fewer than half of strangers would be interested in chatting. They expected to be rebuffed.

In other experiments, the researchers actually asked the commuters to go through with the conversations. At random, some participants were assigned to start a conversation. Others were asked to sit silently, and a third group was told to go about their normal commute routine (which involved silence for some and speaking to a friend for others). The participants were given sealed surveys to complete and mail in after their commute.

The results? People had a more pleasant time when they talked to a stranger versus when they stayed silent. Incredibly, the findings held even when the researchers controlled for personality traits, like extraversion and introversion.

Does the finding that talking to strangers makes people happier make you more likely to strike up conversations in public more often?

"Everyone seems happier and has a more pleasant interaction when they connect versus sit in isolation," Epley said.

Perhaps even more surprising, their conversation partners seemed to welcome the connection, too.

"Nobody was rejected in any of our studies, as far as I can tell," Epley said. "Everybody who tried to talk to somebody was able to."

In another study, the researchers set up participants in a waiting room, so they could test the happiness of both the conversation starter and their target. Again, everyone was happier after chatting — even the person who hadn't started the conversation. Pairs of strangers deep in conversation also reported that the wait seemed shorter.

Epley's research isn't the first to find that interactions with strangers influence mood. Findings reported in 2012 showed that even smiling and nodding at strangers makes people feel more connected. [5 Wacky Things That Are Good for Your Health]

Based on Epley's findings that people expected fewer than half of strangers to want to talk, Epley and his colleagues suspected that a fundamental misunderstanding of others' interest might explain why people sit in silence when chatter would make them happier.

To check the suspicion, the researchers set up studies of cab riders out of Chicago's Midway airport. The riders were surveyed on whether they would normally talk to their cab driver on such a trip. In two experiments, 56 percent and 65 percent said yes.

"Talkers" and their nonchatty opposites, "loners," were then asked to talk to their driver or sit in silence. The results showed, again, that talking improved the experience of the commute. Intriguingly, in the presurvey, the talkers indicated they expected that improvement. The loners, on the other hand, said they expected talking to the driver to be unpleasant.

Those opposing predictions suggest the reason people stay silent is a lack of experience, Epley said. The talkers have tried chatting with strangers and found it pleasant; thus, they make accurate predictions about the experience. The loners, on the other hand, have always stayed quiet, so they make pessimistic predictions and fail to give conversation a chance.

The researchers tested whether people with negative expectations about talking to strangers had stronger memories of bad conversations in the past and found no evidence of a bias induced by bad memories.

Epley will present the findings Friday (Feb. 14) at the annual meeting of the Society for Personality and Social Psychology in Austin, Texas. The work is currently under review at a peer-reviewed journal, he said. In the meantime, he's putting the findings into action.

He's ditched his smartphone and now strikes up conversations during his morning commute. An opening line as simple as, "I like your hat," can lead to a pleasant conversation, he said. And as a result, his mornings are no longer so impersonal. He often finds himself seated next to someone on the train he's talked with before, which "just makes it more pleasant than the alternative."

"Other people are people, too," Epley said. "And it turns out, they'd like to get to know you."