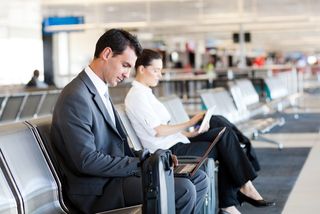 Don't want someone to sit next to you on a public train or bus? Put a bag on the adjacent seat, or even better, avoid eye contact. These are just some of the unspoken rules public commuters use to stay in their personal bubbles, says a sociologist from Yale University.

Esther Kim's new study, during which she chalked up thousands of miles on Greyhound Line buses, revealed the measures commuters will take to avoid each other. And she said the same likely applies to any public space from subways and trains to public parks.

"We live in a world of strangers, where life in public spaces feels increasingly anonymous," Kim said in a statement. "However, avoiding other people actually requires quite a lot of effort, and this is especially true in confined spaces like public transport."

The seeming golden rule of bus transport, Kim found, is that if the bus isn't full don't sit next to someone else, because "it makes you look weird," passengers told her. As seats fill up, passengers put on their acting faces to keep those boarding from placing their rumps next to them. [7 Thoughts That Are Bad For You]

"We engage in all sorts of behavior to avoid others, pretending to be busy, checking phones, rummaging through bags, looking past people or falling asleep," Kim said in the statement. "Sometimes we even don a 'don't-bother-me face' or what's known as the 'hate stare.'"

One 19-year-old Indiana University student from Missouri said: "If all else fails, you can lie and say that you are saving the seat for someone."

This "avoid-contact-at-all-costs" objective changes when the driver announces the bus will be full so all seats should be made available. "The objective changes, from sitting alone to sitting next to a 'normal' person," Kim said.

What's behind the nonsocial behavior? Safety concerns play a large role, Kim found, as passengers considered coach travel to be dangerous, with poorly lit bus stations. They also don't trust fellow commuters. In addition, she added, the nonsocial behavior may result from "the many frustrations of sharing a small public space together for a lengthy amount of time."

Whatever the cause, Kim said, the phenomenon is troubling.

As a sociologist, this is a concern to me because I believe in a healthy society individuals need to engage and interact with others," Kim told LiveScience in an email. "The people I spoke with seemed to tell me that they just don't want to be bothered by strangers."

The bottom line: "I understand that they may feel this way on a long commute, but when these feelings become part of their everyday lives, I believe there will be a breakdown of society," Kim said.

Kim details her findings in the journal Symbolic Interaction.