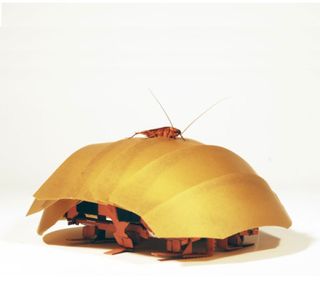 Scientists regularly look to nature for inspiration when designing robots, with the hope of learning from millions of years of evolution. Specifically, the researchers have patterned robots after insects for decades — after all, insects are some of the most successful animals on the planet, comprising about 75 percent of all animal species known to humanity.

Robert Full, an integrative biologist at the University of California, Berkeley, and his colleagues often use roaches to inspire their robot designs. For instance, they have developed machines that copy how roaches can skitter past obstacles and disappear under ledges in the blink of an eye. [See video of the cockroach-inspired robots squeezing through crevices]

Now the researchers have developed a robot that imitates how roaches can invade or escape spaces by squeezing through narrow crevices.

"We can imagine swarms of these robots helping to locate survivors trapped in the rubble from tornadoes or earthquakes or explosions," Full told Live Science.

First, the scientists used high-speed cameras to film cockroaches running through narrow slits. They found the insects could slip through cracks about one-eighth of an inch (3 millimeters) wide — the height of two stacked pennies, and only one-quarter of the standing height of the roaches.

"Cockroaches are incredibly good at getting through small spaces, so we always had to keep an eye on them to make sure they didn't escape from our experiments," Full said.

Cockroaches are able to scurry through tight spaces by splaying their legs out to the side and compressing their exoskeletons to about half their original size. Experiments compressing the roaches suggest the insects can withstand forces up to nearly 900 times their body weight without injury, the researchers said.

Surprisingly, the cockroaches also moved rapidly through confined spaces, at speeds of about 23 inches (60 centimeters) per second. This speed corresponds to about 20 times the lengths of their bodies per second, Full said, or the equivalent of a person who is 5 feet and 8 inches (1.7 meters) tall moving at more than 75 mph (121 km/h).

"This is a new kind of locomotion, an unexplored way to move, that we call body-friction legged crawling," Full said. "[Cockroaches] don't have friction all over their bodies as they move through confined spaces, as something moving through water or soil might — they only have friction from the ceiling and ground along their backs and bellies."

The scientists then designed a simple, cheap, palm-size robot with a plastic shell much like the smooth, tough wings covering the back of a cockroach, and soft legs that could splay outward when the machine was squashed. The robot, named CRAM — short for Compressible Robot with Articulated Mechanisms — was able to squeeze into and run through crevices half its height.

Full noted that researchers are now developing robots inspired by octopuses, worms and starfish that are made from soft, elastic plastic and rubber. These soft robots are resistant to many of the kinds of damage — and can overcome many of the obstacles — that typically impair hard robots.

"Our research suggests that even though cockroaches have rigid, jointed exoskeletons, the fact they can squeeze through seemingly impassable crevices suggest they could serve as very effective models for the next generation of soft robots," Full said. "Roaches suggest that you can have robots with seemingly rigid shells that could still fit into narrow cracks, while at the same time possess the advantages offered by jointed limbs, such as running fast, climbing, jumping and flying."

Full and study lead author Kaushik Jayaram, at Harvard University, detailed their findings online today (Feb. 8) in the journal Proceedings of the National Academy of Sciences.