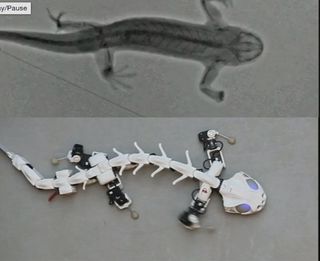 A new robot has recreated the elegant swimming and walking motion of a salamander, by recreating the spinal cord circuits in the real creature.
(Image: © Screen shot from a TED Talk)

A new salamander robot has been designed that can walk, swim and turn around corners.

"We want to make spinal cord models and validate them on robots. Here we want to start simple," Auke Ijspeert, a roboticist at the the Swiss Federal Institute of Technology at Lausanne, said in a recently published TED Talk.

The ultimate goal is to reveal how animals of different types, from primitive lampreys to cats and humans, modulate and control their movement, which could one day help spinal cord injury patients regain control of their lower limbs. [5 Robots That Can Really Move!]

To start out, the team decided to model salamanders. From an evolutionary point of view, salamanders are living fossils — quite close in their motion to the creatures that first stepped from the seas onto land. They also switch seamlessly between walking and swimming, Ijspeert said.

"It's a really key animal from an evolutionary point of view," Ijspeert said in the talk. "It makes a wonderful link between swimming, as you find it in eels or fish, and quadruped locomotion, as you see in mammals, in cats or humans."

In the water, salamanders undulate in what's called anguilliform swimming motion. This swimming motion is produced by a continuous wave of motion throughout the spinal cord. When the salamander is on land, it easily switches to a walking trot gait, Ijspeert said.

The researchers found that these two modes of motion are all orchestrated by the spinal cord. For instance, a decapitated salamander still produces a walking gait if the spinal trait is electrically stimulated. Stimulating the spinal cord more, as if "pressing a gas pedal," tells the headless salamander to switch to its swimming gait, Ijspeert said.

To create the robot, the team first modeled the spinal cord circuits that seem to drive this motion. It turned out that a salamander has essentially kept the very primitive nerve circuits that drive motion in primitive fish such as lampreys, but had simply grafted on two extra neural circuits that control the front and back limbs.

Next, the team used an X-ray video machine to recreate the bone motion of salamanders as they walked and swam. They then identified the most important bones and simulated them in a physical robot.

The findings reveal just how well the spinal cord seems to control movement, which seems to be similar even in humans.

"The brain doesn't have to worry about every muscle, it just has to worry about this high-level modulation and it's really the job of the spinal cord to coordinate all the muscles," Ijspeert said in the talk.