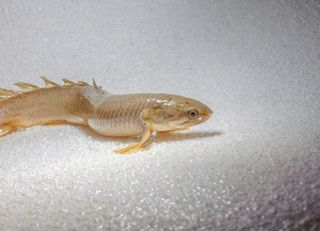 Polypterus senegalus walks by using its fins and body for support. Fins are placed forward and used to push the head and anterior body off the ground while the tail and body push the fish forward over the fin.
(Image: © Antoine Morin)

An unusual species of fish that can walk and breathe air shows that these animals may be more capable of adapting to life on land than previously thought, researchers say.

The new findings may help explain how the ancient fish ancestors of humans colonized the land, the researchers said.

The evolution of the ancient fish that switched from living in water to living on land about 400 million years ago is one of the most pivotal moments in the history of the animal kingdom. These first four-limbed animals, the so-called stem tetrapods, ultimately gave rise to amphibians, reptiles, birds and mammals, including the largest animals to ever live on the planet.

When fish started moving onto land, "the fossil record suggests there was a great deal of diversity among fish, and thus a lot of competition between the fish," said lead study author Emily Standen, an evolutionary and comparative biomechanist at the University of Ottawa in Canada. "One can imagine there was a pretty good drive for those fish that could to get out of that environment and make use of opportunities on land." [Video: Unusual Fish that Can Walk & Breathe Hold Clues to Animal Evolution]

But just how ancient fish made this shift to terrestrial life still remains largely a mystery. To learn more about what happened when the now-extinct fish tried living on land, scientists investigated the bichir (Polypterus senegalus), a modern African fish that has lungs for breathing air, and stubby fins it can use to pull itself along on land. The bichir possesses many traits similar to ones seen in fossils of stem tetrapods, the researchers said.

The scientists raised groups of juvenile bichir on land for eight months to see whether these fish differed in their anatomy and how they moved on land compared with bichir raised in the water. Researchers wanted to test how life on land might trigger changes in such fish.

Raising the fish on land posed some challenges.

"The number one difficulty we faced was how the heck to keep fish alive on land for months at a time," Standen told Live Science. "I designed and built an aquarium setup that had kept a few millimeters of water on its floor, enough to keep the fish moist. In addition, I used misters, like you see in the lettuce aisle at grocery stores to freshen the vegetables, to keep the fish moist and in a very humid environment that helped them survive."

The researchers discovered the bichir raised on land were dramatically different than those raised in water. The land-raised fish lifted their heads higher, held their fins closer to their bodies, took faster steps and undulated their tails less frequently and had fins that slipped less often than bichir raised in water. These land-based fish also underwent changes in their skeletons and musculature that likely paved the way for their changes in behavior. All in all, these alterations helped bichir move more effectively on land.

"I'm very surprised the fish survived so well on land," said Standen, who conducted this research while she was a postdoctoral researcher at McGill University in Montreal. "That was an initial gamble with this experiment — could the fish even be raised on land?"

These findings reveal the bichir is more plastic — that is, malleable — during its development than previously thought. This plasticity is what made this fish capable of growing up very differently depending on its environment.

Given the anatomical similarities found between the bichir and stem tetrapods, the researchers suggest the animals' common ancestor could have possessed the kind of plasticity seen in the bichir today. If so, "this raises the possibility that plasticity may have also existed in stem tetrapods to facilitate their transition to land," Standen said.

"Fish that had the plasticity to allow them to move out onto land benefited by removing themselves from a very competitive environment into a new habitat of plants and insects supplying shelter and food resources, free of major predation or competition," Standen added. Over time, traits permitted by such plasticity may have proven advantageous enough to evolve into permanent fixtures in these ancient animals, she said.

Uncovering evidence of whether or not stem tetrapods really displayed such plasticity is very challenging. "The best way to find such evidence is to unearth fossils of a single population of these stem tetrapod fishes and look for natural variation in it," study co-author Hans Larsson, a vertebrate paleontologist at McGill University, told Live Science. "If we can, we might be able to find fossils that showed this population demonstrated some degree of plasticity."

Future research can seek to uncover the genetic and developmental mechanisms underlying the plasticity of the bichir, Larsson said. The researchers also want to raise multiple generations of bichir on land "to see how far this plasticity goes, how consistent developmental changes are in the long run," Standen said.

Standen, Larsson and their colleague Trina Du detailed their findings in the Aug. 28 issue of the journal Nature.