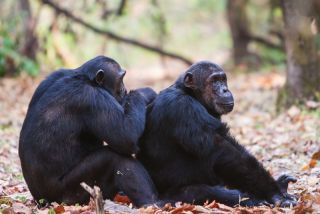 Being orphaned as a baby may have a bigger impact on chimpanzees than was previously thought, a new study finds. Scientists found that when infant chimpanzees were taken from their parents, the chimps groomed fellow animals considerably less in later life.

A team of Austrian and Dutch researchers observed chimpanzees that had been caged by themselves for decades in biomedical labs; the scientists also observed individuals that had been orphaned but grew up socially in a zoo community. The researchers already knew that the social behaviors of former lab chimpanzees differ based on the age they were taken away from their mothers, so the scientists wanted to compare these effects with chimps that were orphaned but reared around other animals in a zoo.

The researchers investigated how long chimpanzees tolerated staying within an arm's reach of another group member, and measured the animals' social grooming activity. To do so, the scientists used a method called social network analysis, which helps researchers map social structures by forming graphs out of nodes that represent individuals interlinked with lines that represent social interactions. [Grooming Gallery: See Images of Social Chimps]

"Social grooming is extremely important," study lead author Elfie Kalcher-Sommersguter, a researcher in animal communications at the University of Graz in Austria, told Live Science. "It serves not only hygienic but [also] many other functions, including the establishment and maintenance of social bonds."

The team saw that orphaned chimpanzees had fewer grooming partners and were less inclined to engage in grooming than were those chimps reared by their mothers. Some of the ex-laboratory chimpanzees seemed unable to form strong bonds with others, while the zoo chimpanzees (a different group than the former lab chimps) formed bonds but still had fewer partners with which they were comfortable with grooming.

Primates use grooming as a social tool in exchange for support and to comfort each other if they're experiencing distress. The practice is such a vital part of chimpanzees' lives that when grooming is reduced, it can have a big impact on how the animals are viewed in their communities, the researchers said.

"Less grooming means that these chimpanzees are less strongly integrated in their social groups," Kalcher-Sommersguter said.

Between 1950 and 1980, thousands of chimpanzee infants were caught in West Africa and exported to Europe, Japan and the United States, to be caged and used in biomedical research. Many zoos also caught chimps to create founder populations. Animals that had been freed from the research laboratories and ones in the founder populations were studied by the team.

The researchers found that the scarcity of grooming behavior was evident in orphaned chimpanzees that had lived together with a group for up to 40 years. This showed that the effects were very long-lasting, even more so than was previously thought.

"We assume that the effects are very serious, because grooming impacts so many aspects of a chimpanzee's social life," Kalcher-Sommersguter said.

The new study did not investigate the chimpanzees' particular emotions. But because primates experience empathy and theory of mind and have very complex relationships, this research could inspire other interesting findings on emotions in the future, the scientists said. The team is now planning to continue its research by focusing on aspects that could not be answered in the recent study, such as the emotional effect less grooming may have on the animals, the researchers said.

The detailed findings were published online in the journal Scientific Reports on Nov. 10, 2015.