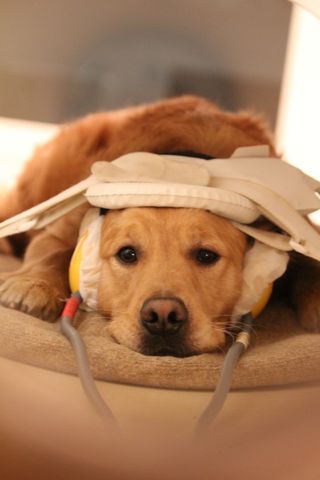 Human and dog brains process sounds in similar ways, and this may allow the two species to understand each other's emotions, new research shows.

Scientists found that dogs and humans have the same "voice areas" in their brains, and these areas are responsible for understanding and interpreting both dog and human sounds.

The presence of voice areas in both dog and human brains suggests this region existed in an ancestor of the two species that lived as long ago as 100 million years ago, Andics said. [The 10 Most Popular Dog Breeds]

The brain of that common ancestor was similar to the brain of today's dogs; however, the human brain has gone through much more change since the split, Andics told Live Science.

Much research has looked into the strong social bond between people and dogs, but scientists still know very little about the brain mechanism behind this alliance, he said.

In the study, the researchers tested 11 dogs — golden retrievers and border collies — along with 22 people. The dogs and humans were both presented with human- and dog-produced sounds, including emotional ones such as whining, cheerful barking, crying and laughing. Meanwhile, the researchers observed the subjects' brain reactions using an fMRI scanner.

Because the study was conducted on just two dog breeds, Andics suggested that future research should include other breeds. This would test for potential differences that may depend on brain shape and other factors.