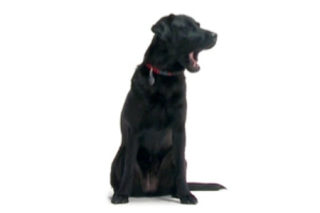 Brian Hare is an evolutionary anthropologist and Vanessa Woods is a research scientist, both at Duke University. Together, they founded Dognition, a website that helps owners find the genius in their dogs. Some of the content from this post is adapted from their New York Times bestselling book The Genius of Dogs. Hare and Woods contributed this article to LiveScience's Expert Voices: Op-Ed & Insights.

Dogs may be even more connected to humans than people have realized: A new study from Japan and results from the Dognition citizen-science project both show that dogs yawn contagiously, and dogs that are bonded with people are more likely to yawn when they do.

Yawning is one of the more bizarre biological functions in humans and other animals. No one knows why we do it. Some say it increases oxygen. Others say it is linked to controlling brain temperature. Maybe it stretches the mouth and throat, or keeps us alert.

The strangest thing about yawning is that it's contagious. Seeing or hearing someone yawn, or even reading about yawning often leads to an irresistible urge to yawn. And it's not random: You're more likely to yawn contagiously when someone you love yawns than when a stranger does.

Does your dog yawn contagiously? Try the test here.

Humans are acutely susceptible to the emotions of others. People are more likely to laugh when they see someone laughing, and cry if they see someone in distress. This is also known as empathy. Empathy is one of the best human qualities. It encourages good behavior and prevents harmful acts. Empathy is not something that is taught; it is present even in young children, and grows and strengthens throughout life.

An interesting question is whether animals are also capable of empathy. This is difficult to measure, since animals can't tell us how they are feeling. But because contagious yawning is related to empathy scores in humans, there have been several researchers who have used contagious yawning as a measure of empathy, at least in a basic form, in animals.

Besides primates, only two species have been shown to yawn contagiously. One of them, perhaps not surprisingly, is the dog(the other is the Australian budgerigar). Initial studies produced conflicting results as to whether or not dogs yawned contagiously. And when dogs did yawn contagiously, researchers questioned whether this was a sign of stress, rather than empathy.

However, a new study from Teresa Romero and colleagues from the University of Tokyo found that not only do dogs yawn contagiously, but their yawning does not seem to be a sign of stress — and, like humans, they are more likely to yawn with someone they are emotionally bonded to.

In that study, the researchers had 25 dogs watch the yawning of either their owner or a stranger. A heart-rate monitor measured the levels of stress in the dogs. Just over half of the dogs yawned contagiously (54 percent). Dogs yawned more frequently when their owner yawned, showing that the emotional connection between dogs and their owners produces a stronger response. There was no significant increase in heart rate in the dogs during the experiment, so the dogs' yawning did not seem to be stress related.

These results are echoed in our results from Dognition. Of the 250 participants in the beta program, 20 percent of the dogs yawned. The difference between the two studies was likely due to a slightly different method of examining individual yawning (the Romero study recorded dogs 5 minutes after the human yawned, while participants in Dognition recorded 2 minutes after the owner yawned).

Also, in Dognition, there was a link between the yawn test and a dog's cunning scores, which measures how dogs use their owners' attention to deceive them. Dogs that were skilled at reading their owner's body language, and at using this information to their own advantage, were also more likely to yawn.

For a quirk of biology, yawns certainly reveal a lot. And if you're wondering how much your spouse, friend or dog loves you, surreptitiously stretch and give a big yaaaaaaawn .

Hare and Woods founded Dognition, a website that helps you find the genius in your dog. This post was an adaptation from their book The Genius of Dogs. The authors' most recent Op-Ed was America's Fleeting Chance to Correct Chimps' Endangered Status, and their additional contributions are available on their profile page. The views expressed are those of the author and do not necessarily reflect the views of the publisher. This article was originally published on LiveScience.com.