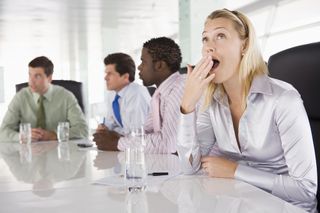 Last week, while my daughter was in the middle of telling me a very important story, I did something very rude. I just couldn't help it. I opened my mouth and inhaled a giant involuntary yawn. Was I bored with her story? Heck, no. But it definitely created an awkward moment. The best I could do was explain what a yawn really meant.

According to a 2007 study in the Journal of Evolutionary Psychology, yawning increases blood flow to the brain, which helps move heat away and cools the area. In essence, those unexpected yawns are likely the result of a slightly overheated brain, according to the study.

The study consisted of two experiments on "contagious yawning," in which people yawn after seeing others yawn. One experiment compared yawning between participants breathing through their noses, as opposed to their mouths, and the other experiment tested yawners in cold versus warm temperatures.

Researchers were not able to invoke contagious yawning at all with the nose-breathing group. On the other hand, 48 percent of mouth breathers yawned after watching video of others yawning. In their study, the researchers pointed to evidence that the blood vessels in the nasal cavity send cool blood to the brain. Breathing through your nose cools off those blood vessels, so you're less likely to feel the need to yawn, according to the study.

In the second experiment, patients who held a cold pack to their heads responded with contagious yawning only 9 percent of the time, whereas participants with warm or room temperature packs yawned 41 percent of the time. Researchers concluded that the cold packs reduced brain temperature enough to ward off the yawn in most cases.

Yawning is a good thing. It's one way we can keep the brain awake and alert. But, there are definitely times when an unexpected yawn can be embarrassing. It gives the impression that you're less-than enthused, and that’s definitely not something you want while you're in the middle of a deep conversation, or an important board meeting.

Here are a few tips to help keep you from yawning at those inopportune moments:

Healthy Bites appears on MyHealthNewsDaily on Wednesdays. Deborah Herlax Enos is a certified nutritionist, and a health coach and weight loss expert in the Seattle area with more than 20 years of experience. Read more tips on her blog, Health in a Hurry!