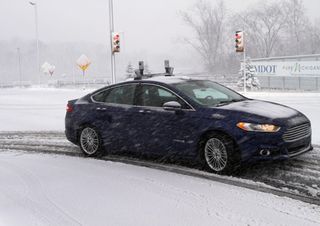 One of Ford's autonomous vehicles during winter-weather testing in a simulated environment.
(Image: © Ford Motor Company)

Auto giant Ford would like the future's self-driving cars to be more than fair-weather friends: The company is testing its autonomous vehicles on snow-covered roads.

"It's one thing for a car to drive itself in perfect weather," Jim McBride, Ford's technical leader for autonomous vehicles, said in a statement by the car company. "It's quite another to do so when the car's sensors can't see the road because it's covered in snow."

Ford, in collaboration with the University of Michigan, is testing its cars under wintry elements at Mcity – a 32-acre (13 hectares) simulated urban environment located at the university. [Self-Driving Cars: 5 Problems That Need Solutions]

Like other autonomous cars, Ford's driverless vehicle relies on LiDAR, which uses laser light to create 3D images of its surroundings. When snow or some other substance covers these surroundings, LiDAR and other sensors can't see the roads they're supposed to be navigating.

The Ford inclement-weather system creates high-resolution 3D maps of roads that also include features above the roads, such as traffic signs and other road markings, landmarks and topography. These maps are created while Ford's autonomous cars are driving around in good weather. Then when it's snowy, for instance, the car's sensors can use these above-the-road features to pinpoint its location and pull up the high-resolution maps of the actual road surface stored in the computer to continue navigating even when the system can't "see" the road's surface.

"Maps developed by other companies don't always work in snow-covered landscapes," Ryan Eustice, associate professor at University of Michigan college of engineering, said in the statement. "The maps we created with Ford contain useful information about the 3D environment around the car, allowing the vehicle to localize even with a blanket of snow covering the ground."

In addition to being able to navigate, Ford's autonomous vehicles can also activate safety features automatically.

"The vehicle's normal safety systems, like electronic stability control and traction control, which often are used on slippery winter roads, work in unison with the autonomous- driving software," McBride said.

Google and Tesla are also testing driverless cars. Google's self-driving cars are on the roads in Mountain View, California, and Austin, Texas, though during particularly stormy weather the vehicles are designed to pull over until the inclement weather passes, according to the company's December report.