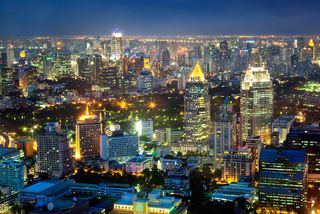 Humans are having an ever-increasing impact on planet Earth.
(Image: © Imaake / Shutterstock.com)

Evidence for a new geologic epoch continues to accumulate, like layers of sediment that over time harden into strata. Although those who study the branch of geology known as stratigraphy—the study of those strata and their resolution into Earth's vast geologic time scale—will continue to debate the idea of the Anthropocene for what may seem like eons, the record in the rock continues to pile up.

"This Anthropocene signal is global, it is sharp and all the signs are big," argues geologist Jan Zalasiewicz of Leicester University, chair of the group tasked with making a formal recommendation on the potential for a human-made, future-looking epoch. Twenty-four members of that working group, including Zalasiewicz, have just published their compilation of the gathering evidence in the January 8 Science. "A real geological phenomenon is taking place, it is still going on. In many respects, it's accelerating even as we speak."

The present geologic epoch is known as the Holocene, or "entirely recent," stretching back 11,700 years before 1950 to when the last ice age began to melt and raised sea levels by roughly 120 meters over a few millennia. During that transition, carbon dioxide levels in the atmosphere increased by roughly one part per million per century. More recently, however, CO2 levels have been increasing by two ppm per year, and rather than slowly returning to an ice age the world has become ever warmer, melting more ice. The rapid increase in excess CO2 comes from the fossil fuel burning and land use of one species that first appeared approximately 200,000 years ago: Homo sapiens.

In fact, rapid development of technology, swelling population and growing consumption of resources from crops to metals have expanded humanity's impacts, particularly after 1950 or so, an inflection point some have dubbed the "Great Acceleration." People have created long-lasting new materials, ranging from copper alloys to plastics that will form long-lived, so-called "technofossils." Enough concrete has been made by now to cover every square meter of the world in a kilogram of the building material. Sufficient plastic is currently manufactured each year to weigh as much as all seven billion–plus humans on the planet. People move nearly three times as much rock and dirt via mining than the amount that travels with water through all the world's rivers. Modern chemistry has even liberated civilization from the natural nitrogen cycle that has prevailed for the last 2.5 billion years. And tiny soot particles left over after burning coal, oil and natural gas now can be found in sediments from tropical lakes to the middle of the Pacific Ocean, a permanent smudge on the geologic record.

As a result, the study authors argue, Earth has entered a new epoch that is "functionally and stratigraphically distinct from the Holocene," in the words of the paper laying out the case. Humanity has even reconfigured the course of future evolution by shifting plants and animals around the globe or eliminating certain species—the same biological markers known as index fossils and used to define most of the time intervals that divide the last 540 million years, an eon known as the Phanerozoic.

Key questions remain, however, such as when specifically this new epoch began—whether it is old and pegged to the advent of farming or widespread burning of landscapes by ancient ancestors or is very new. In fact, some, including Zalasiewicz, have proposed a very precise start date for the Anthropocene: July 16, 1945, the date of the first test of an atomic bomb at Alamogordo, N.M., and the beginning of the spread of rare radioactive elements like plutonium around the globe. The roots of the Anthropocene may reach back into the Pleistocene but the most evident signs point to a new epoch that began around 1950 when human population and many other signals like bomb testing really took off, leaving manufactured radionuclides that will be detectable for at least 100,000 years.

The real hard work of Anthropocene stratigraphy has yet to be conducted or even attempted. For example, examining the strata forming off the California coast to look for plutonium and soot. "That is science that will need some organization and some money," Zalasiewicz notes, adding that one could also look for the shells of microscopic animals waxing and waning in the most recent strata or when rat teeth begin to appear on different islands. "Yes, the signal is pretty big but correlating Anthropocene deposits between Florida and Pennsylvania, let alone the coast of Papua New Guinea and Patagonia, using fossils requires detailed successions," he adds. "Generations of geologists sweated over that for Jurassic ammonites and Silurian graptolites."

And there is not even agreement within the working group itself on whether to propose formalizing the epoch, let alone its beginning, several participants note. "Many find it difficult to accept that an epoch that is so short in duration can be adequately recognized in geological successions, let alone the utility of it being formalized," says stratigrapher Colin Waters of the British Geological Survey, lead author of the new analysis.

The Anthropocene may be a new name but it is not a new idea, and has been called everything from the upper Holocene to the Poubellian (from the French for garbage can). Not everyone in the geologic community or the wider world is convinced the new epoch is a good idea. Some note hubris or a tendency to overestimate human influence, others think the big changes like mass extinctions or climate change have yet to happen, still others wonder whether geologists should learn more from archaeologists to determine whether the Anthropocene might supersede much of the Holocene, given large-scale human impacts that stretch back thousands of years.

At base, however, the core argument is whether and how the historical and geologic records might merge. At some point in time, whether it is the beginning of the Anthropocene, the end of the Holocene or some other arbitrary date, the record in the rock and in human history match up. To record geologic events going forward it seems sensible to switch over to the human timescale tied to some crossover point that can be found in recent rocks of "radical change to the entire Earth system," in Waters's words. On the other hand, the Anthropocene may exist, but what is it good for in terms of geology?

"The Anthropocene is a young science and we are working on this like a cottage industry, in bits of time in the evening," Zalasiewicz adds. "We are putting together ideas and then hoping to gather responses from people who can give us some sensible feedback from which we can eventually develop our formal recommendation."