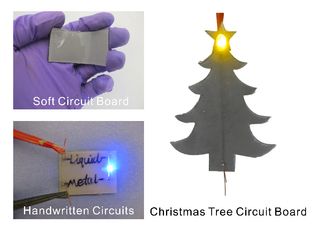 Scientists have developed a way to produce soft, flexible and stretchy electronic circuits and radio antennas by hand, simply by writing on specially designed sheets of material.

This technique could help people draw electronic devices into existence on demand for customized devices, researchers said in a new study describing the method.

The new technique researchers developed creates circuits by fusing, or sintering, together bits of metal to form electrically conductive wires. But the newly developed process does not use heat, as is often the case with sintering. Instead, this method involves soft sheets made of silicone rubber that have many tiny droplets of liquid metal embedded inside them. Pressing down on these sheets using, for instance, the tip of a pen, ruptures the capsules, much like popping miniature water balloons, and the liquid metal inside can pool to form circuit elements.

The researchers used a metal known as eutectic gallium indium (EGaIn), a highly electrically conductive alloy that is liquid at about 60 degrees Fahrenheit (15.5 degrees Celsius). They embedded droplets of EGaIn that were only about 100 nanometers, or billionths of a meter, wide into sheets of the a kind of silicone rubber known as PDMS.

When these droplets pool together, their electrical conductivity increases about tenfold compared to when they are separate, the researchers said. To understand why, imagine a hallway covered with water balloons.

"If you covered a floor with water balloons, you could not make a conductive path between balloons," Dickey told Live Science. However, if the balloons get popped, they merge to form a continuous electrically conductive pathway, he explained.

These mechanically sintered metal pathways could also serve as radio antennas. Researchers could tune which frequencies these antennas pick up simply by changing the length of the pathways.

"An antenna can be created on the fly simply with a magic marker," Dickey said.

"We live in a world with lots of soft materials — our bodies, clothing," Dickey said. "Most electronics are made from rigid materials and are therefore mechanically incompatible with our 'soft world.' Rigid electronics also tend to fail catastrophically when deformed — I've seen plenty of cracked phones, as an example. The circuit boards we made are soft and deformable."

The soft circuit boards can easily be cut into desired shapes, the researchers said, and it is also possible to connect rigid components, such as lights, simply by inserting them into the sheets. For instance, using this new technique, researchers created Christmas trees that could be lighted.

One drawback of this approach is that droplets may sinter accidentally if they're exposed to excessive pressures. The researchers discovered that one way to solve this problem is to brush a clear glue onto the sheets. The glue dries and forms a rigid protective layer that could prevent unwanted sintering after the circuits are written, the scientists said.

Another limitation of this approach is that the wires are only as thin as the stylus used to create them and thus are nowhere as narrow as the wires in traditional microchips. The scientists noted that commercial desktop lasers could lead to more complex patterns, although this does make the fabrication process more complicated. Another possible way to form straight, thin channels involves embedding the droplets in orderly patterns within the silicone rubber, such as in microscopic rows.

However, "Many advances are still needed to make this commercially viable," Dickey said. "This is a simple demonstration to illustrate the concept of soft circuits."

The scientists detailed their findings online Nov. 16 in the journal Small.