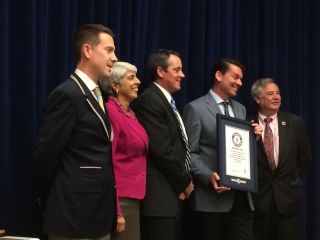 ARLINGTON, Va. — A new Guinness World Record has been set for the fastest microchip ever made, officials announced Tuesday (Oct. 28).

The new chip, or integrated circuit, is a type of "amplifier" for signals, and operates at 1 trillion cycles per second, or 1 terahertz. That's 150 billion cycles faster than the team's previous record of 850 gigahertz, set in 2012, according to officials from Northrop Grumman Corp., who built the device with funding from the Defense Advanced Research Projects Agency (DARPA).

"Today, we get to celebrate, with our partner and our performer Northrup Grumman, an exciting record from Guinness for some work that [has been] done," DARPA Director Arati Prabhakar said at a news conference here at the agency's headquarters yesterday. "We're opening up the terahertz regime." [Humanoid Robots to Flying Cars: 10 Coolest DARPA Projects]

The applications of terahertz processing include communication networks with much greater capacity, high-resolution imaging systems and spectrometers that could detect toxic chemicals or explosives, DARPA officials said.

The speedy device functions to amplify a signal's power, which is necessary for generating and detecting high-frequency signals. The amount of amplification, or gain, of the new chip was 9 decibels at 1.0 terahertz and 8 decibels at 1.03 terahertz, DARPA representatives said. (A decibel is a logarithmic unit used to express the ratio between two values — in this case, power.) For comparison, the chips found in standard cellphones operate at only about 2 gigahertz.

If the new integrated circuit were a car, it would be traveling at more than 32,000 mph (51,500 km/h), said Bill Deal, a program manager at Northrop Grumman. And it's only about the size of a grain of salt.

Potential applications include aircraft imaging systems that would allow planes see through fog or smoke, Deal said. These devices could penetrate the haze because they operate in a part of the electromagnetic spectrum between microwaves and visible light.

In medicine, terahertz technology could be used for high-resolution imaging of burns. Medical treatment differs depending on the severity of the burn, and such a system could differentiate between second- and third-degree burns, Deal said.

But making a chip that fast was no easy feat. Microchips are made of tiny switches called transistors, which had to be made with great precision.

"If you've ever tuned a guitar, you know that to make the string hit a really high note, it has to be shorter, lighter and tighter," Dev Palmer, the DARPA program manager for the terahertz project, said at the news conference. "Making terahertz transistors is actually a lot like that."

The project consisted of three phases. First, the team worked to create a 670 Hz chip, which was considered "an extremely stretch goal" at the time, Palmer said. But once the team achieved that, in phase two, they set out to make an 850 Hz chip. Finally, in the third phase, they reached 1 terahertz. The entire project took less than five years, Palmer said.

NASA's Radiometer Atmospheric CubeSat Experiment (RACE) was built to use terahertz technology to measure water in the atmosphere, and was set launch to the International Space Station last night on an Orbital Sciences launch. But the rocket exploded shortly after liftoff, destroying all cargo and experiments aboard. NASA has not yet stated if and when a replacement experiement will be deployed.