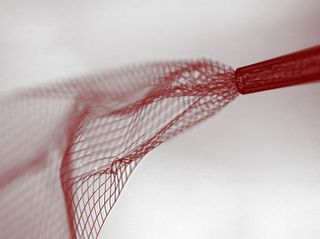 This image shows the mesh electronics as they are being injected through microscopic glass needle into a solution.
(Image: © Lieber Research Group, Harvard University)

Brain activity can be monitored in real-time with tiny injectable flexible electronics, according to a new study done in mice.

Such devices could one day be used to map brain activity, or even stimulate activity to help treat people with disorders such as Parkinson's disease, scientists added.

Traditional electronics are rigid, but inventors have recently developed flexible and stretchable electronics. These new devices could potentially lead to video screens one could roll up or fold to fit in a pocket.

As such, a sheet can be placed into the body only by cutting a slit into the tissue that is at least as wide as the sheet, for example, cutting a slit into a person's skin or skull, said study co-author Charles Lieber, a nanoscientist and nanotechnologist at Harvard University. "It is difficult yet critical to protect the complex and fragile electronics when it is delivered," he said. "Traditional procedures all involve surgery that would make an opening equal to the size of the structure."

Now scientists have designed electronics flexible enough to get stuffed into the needle of a syringe — a tube with a diameter as small as about 100 microns, or about the average width of a human hair. [10 Technologies That Will Transform Your Life]

The new devices start off as tiny flat sheets about the size of a postage stamp made of metal electrodes and silicone wires that are each only nanometers, or billionths, of a meter thick. These sheets are meshes like chicken wire, consisting of about 90 percent empty space.

A variety of sensors can incorporated into these meshes. To feed data from these sensors outward, one side of each of the meshes contains metal pads that researchers can hook up to outside wires.

When suspended in liquid that is drawn into a syringe, the meshes naturally roll up into a scroll-like, tubular shape. After they are injected, they return back to their original shapes in less than an hour.

In experiments, the scientists injected these meshes into two distinct brain regions in live mice. "When we injected the electronics into a mouse brain with almost no bleeding and successfully recorded brain activity, we knew we were onto something very exciting," Lieber said.

The flexible, thin nature of the wires and the porous quality of the meshes helped the devices to integrate into the living tissues they were implanted within. "There is no scar tissue or immune response around the injected ultra-flexible mesh electronics months after implantation, which contrasts to all work to date with larger and more rigid probes," Lieber said. "This could be transformative for brain science and medicine."

These devices were able to network with healthy neurons in the mouse brains and monitor their activity. The setup they used is much smaller and lighter than conventional electronic systems implanted in brains. "It allows the mouse to behave quite naturally, without a weight on its head," Lieber said.

In the future, the researchers would like to see if their injectable devices can remain stable for long spans of time in the body. Such medical implants could help record and stimulate activity in the brain, such as in regions damaged by Parkinson's disease, Lieber said. Mesh electronics could also go in the eyes, and be combined with stem cell therapies, he added.

In other experiments, the researchers showed they could inject and integrate their meshes into a variety of synthetic structures as well, such as cavities inside silicone rubber blocks. They suggest that injectable electronics could be used to monitor artificial structures with corrosion and pressure sensors.

The scientists noted that more than 90 percent of their devices worked after injection. Still, they would like to achieve total success in the future, which involves factors such as the best speeds for the injections. However, Lieber noted that even at 90 percent, their mesh electronics are better for commercial applications than conventional brain probes, many of which fail to work over time because they damage the brains they are implanted in.

The scientists detailed their findings online today (June 8) in the journal Nature Nanotechnology.