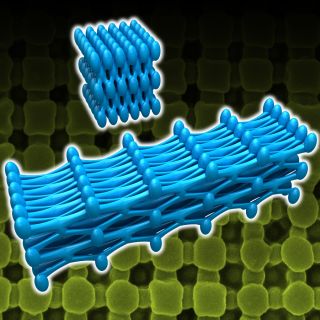 This image illustrates the underlying mechanics of enhanced stretchability in materials through the use of 3D nanostructures.
(Image: © Junyong Park and Seokwoo Jeon)

South Korean researchers have found a way to make electronics stretch and flex like rubber, by combining a three-dimensional polymer structure with metal.

The new work brings wearable electronics and flexible displays closer to reality. Flexible computers and LED displays already exist, but they are more like paper or thin sheets of plastic. Making a device that retains its electrical conductivity after repeatedly being stretched has been more elusive.

['Super Skin' Can Stretch and Sense for Bionic Humans]

Seokwoo Jeon, an assistant professor of materials science and engineering at the Korea Advanced Institute of Science and Technology, led the research, which appears in the June 26 issue of Nature Communications.

To make the stretchable electronics, the team took a polymer called a photoresist and exposed it to ultraviolet light. This is similar to the process used to make computer chips, but in this case they passed the light through a mask that diffracted it, forming an interference pattern. Such patterns are familiar to anyone who has ever passed light through a screen or a slit – one sees a pattern of light and dark areas projected on a surface. Those interference patterns, though, also exist in three dimensions.

The photoresist is "developed" in a way similar to film by exposing it to other chemicals. After that, it has a three-dimensional structure that the interference pattern leaves behind. That structure functions as a mold for the elastic substance, called PDMS (for polydimethylsiloxane).

PDMS stretches well but it isn't conductive. So two layers of nano-structured PDMS are pieced together in a sandwich-like configuration and filled with a mix of the metals gallium and indium. The result is a netlike structure that stretches and keeps on conducting electricity no matter how many times it's pulled and released. The material is also transparent.

The piece of the conductor made by the lab is only about an inch on a side. But Jeon noted that it is relatively cheap to make and scalable. Beyond electronics, he noted, there are other applications that might require building nanostructures, but his method shows it can be done efficiently and cheaply.

To demonstrate the material, Jeon and his colleagues built a simple circuit of two light-emitting diodes that stayed lit even when the conductor was stretched to twice its normal length. They also showed the material stretched over the surface of a cigarette lighter and on a small sphere.

An electrically conductive material that stretches like that could be used in simple switches similar to touch panels on lights. It could be made into touch-panel displays that aren't panels. Its additional flexibility and elasticity means that in clothing, one isn't limited by the fact that metal wires don't stretch.