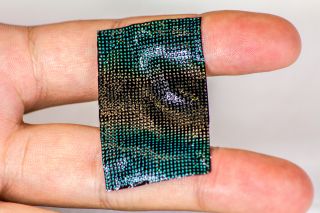 In this photo, the flexible sensor's color variation reveals the temperature range beneath it.
(Image: © Nature Communications. Photo courtesy of John A. Rogers)

Imagine sticking a patch made of flexible electronics on your skin that could read your body temperature, monitor your blood circulation, even tell you when you need to put on sunscreen — and that wouldn't leave the skin underneath it clammy the way Band-Aids do.

A team of researchers at Northwestern University in Illinois and the University of Illinois at Urbana–Champaign say they have built such a patch, and it's about the size of a bandage. It's made of plastic and thousands of tiny liquid crystals, not unlike the ones that light up computer and smartphone screens. It's so flexible that it molds to the body like a second skin.

The device was made to detect changes in the temperature of the skin beneath it; the liquid crystals change color in response to body heat. There are so many crystals, some 3,600 of them, that they can actually depict a heat map, or a picture of what lies below the skin. "It's like the stuff they used to have in mood rings," said John A. Rogers, a professor of materials science at the University of Illinois whose lab collaborated on the project. [Bionic Humans: Top 10 Technologies]

This device, however, is sophisticated enough to diagnose very real problems. The device reveals the temperature of the skin beneath it with with high precision, which is important because skin temperature reflects underlying characteristics, such as blood flow, he said. And the device presents the data in a useable format. "We can get a readout using color," Rogers told Live Science.

A temperature-sensing device that could be attached to a person's skin, and that is so unobtrusive that people forget they are wearing it, would be a great help to physicians, Rogers said.

For example, the device could reveal problems such as poor circulation in the extremities, which can be a symptom of diabetes, or an early sign of heart disease.

The device could also be used to detect some types of injuries in the skin and tissue just underneath the sensor. This is because the tissue near an injury site generally warms up, in a sign that inflammation or infection might be on the way. The sensor could also yield information such as how hydrated the skin is, the researchers said.

To test their device, the researchers attached a small antenna with the sensor, as well as a heating element. They sent a signal to the antenna to turn on the heating element, and found they could measure the distribution and diffusion of that heat through the skin and tissue.

It's possible that researchers could add other kinds of sensors to the device, too. For example, an ultraviolet light sensor combined with a sensor for moisture could alert the wearer that they are in danger of getting sunburned, for instance if the UV levels are high and the skin is becoming dry and hot.

And because the device allows air to pass through it, the skin beneath the sensor can "breathe." That means users would not get the clammy sweat that accumulates under bandages, which can cause irritation, Rogers said.

The device is so small that it doesn't need a battery. There's a wireless and flexible power system on the back, which can run on power from a remote source, said Yihui Zhang, an assistant professor of civil engineering at Northwestern and one of the leaders of the research effort.

Rogers said the cost of the device should be relatively low, since the sensor doesn't use any exotic materials or parts. "We're talking about a few dollars," he said.

The scientists are working with a Cambridge, Massachusetts-based company called MC10 Inc. to commercialize the technology.

A paper outlining the research appeared in the Sept. 19 issue of the journal Nature Communications.