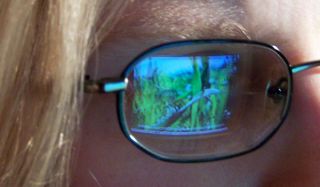 Whether it's for work or play, many people spend hours a day reading on e-readers, texting on smartphones, typing on laptops or playing on tablets. But what does this mean for eye health?

There's no research that shows constant technology use causes any permanent vision damage . But staring at bright screens for hours on end can lead to smaller-scale problems, said Dr. Richard Shugarman, a volunteer professor of ophthalmology at the Bascom Palmer Eye Institute at the University of Miami.

Many people will go to the ophthalmologist and "complain about their eyes feeling uncomfortable, thinking there's something wrong with their vision ," Shugarman told MyHealthNewsDaily. But they don't always realize ocular discomfort can be a result of too much technology, he said.

Here are some common eye ailments that can arise from too much screen time:

Reading dark print on an extremely bright background can lead to spasms of the muscles at the temples, which causes stress headaches, he said.

"Black on gray is easier for reading versus black on a brighter white," Shugarman said, so it's important to decrease the contrast if you find yourself developing headaches from trying to read off a screen.

When looking at something in the distance, your eyes automatically blink a certain number of times.

However, blink rate slows down when you look at things that are closer to your face, Shugarman said, which means tears evaporate more quickly than when you were blinking more frequently.

"You don't have that sort of windshield-wiper effect of the tears around and keeping a sharp, glossy, comfortable surface" on your eyes, he said.

So for people who already have drier eyes than the general population including contact lens wearers whose lenses sit on top of the tear film staring closely at a screen for long periods can exacerbate dryness and cause itching, strong blinking and grit collection in the eyes, Shugarman said.

Not only does blink rate decrease when you look at things up close, but your eyes also converge slightly , Shugarman said. "The pupils get smaller, muscles in the eye adjust the size of the lens, and the two eyes have to converge.

Spending hours on a computer or hand-held device keeps the eyes converged and strains the eye muscles to cause headaches, he said. The eyes are generally more comfortable when they are parallel (your eyes are parallel when you look at far distances).

To remedy this problem, look away from the screen a few times an hour to give eye muscles a break and avoid strain, he said.

Pass it on: Spending too much time staring at bright screens from our laptops, smartphones and tablets can cause tension headaches, eye strain and dry eye.