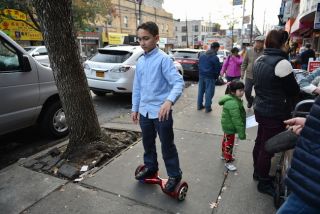 Self-balancing "hoverboard" scooters, once lauded as trendy electronic skateboards, are now the subject of an ongoing safety investigation in the United States. Some online retailers are pulling certain brands off their virtual shelves following several incidents in which the futuristic devices caught fire or exploded. But it's likely not the boards themselves that are causing these flare-ups, but rather their energy sources: shoddily made lithium-ion batteries, experts say.

Lithium-ion batteries with faulty circuitry may explain some of the recent problems, two scientists told Live Science. For instance, in Louisiana, a charging hoverboard exploded and burned down a house just before Thanksgiving, reported WGNtv.com. And another board burst into flames at a mall in Auburn, Washington, in early December, according to Fox 13.

In light of these and other incidents, online retail giants Amazon and Overstock have pulled a number of hoverboard models off of their websites. Moreover, many airlines are now banning the boards on planes, citing safety risks. The U.S. Customs and Border Protection (CBP) has seized 164 hoverboards that had fake batteries or other counterfeit signs, according to a statement from the agency. [9 Odd Ways Your Tech Device May Injure You]

Lithium-ion batteries, first commercialized by Sony Corporation in 1991, give power to countless electronics, including cellphones, laptops, power tools and children's toys. Lithium itself is fairly dangerous; it can explode if it comes into contact with oxygen or water. But Sony developed a way to contain the metal, said Lloyd Gordon, the chief electrical safety officer at Los Alamos National Laboratory in New Mexico.

The invention keeps lithium ions in "some sort of a suspension or chemical so that it's never pure lithium," Gordon told Live Science.

These days, there are about six kinds of lithium-ion technology, he said. But, in essence, scientists have developed ways to ensure that the ions will flow from the anode end of the battery, through an electrolyte fluid and then reach the cathode, releasing energy as this occurs. During recharging, the ions return to the anode.

The battery cell containing these elements usually isn't a problem, but the electronic circuitry surrounding the cell can cause glitches if the battery isn't properly made, Gordon said.

"Lithium technology, per se, is very safe if we keep the user from overcharging it, over discharging it or letting it get too hot," he said.

Lithium-ion batteries in brand-name laptops and cellphones are often built according to strict standards, Gordon said.

For example, a laptop might have 12 lithium-ion cells, "and there's a little computer in the battery — it's called a smart battery — that's actually watching over and taking care of each cell," Gordon said. "If one cell begins to go bad, it makes the battery stop working."

But counterfeit lithium-ion batteries often lack these safety features, and will leave out the essential electronic circuitry, he added.

If a faulty lithium-ion battery is overcharged or overheats — possibly while a person is using it in a hoverboard or has it plugged into a charger — the ions can gather in one spot and be deposited as metallic lithium within the battery. Meanwhile, the heat can cause oxygen bubbles within the gel.

"Remember that oxygen and lithium don't get along?" Gordon said. "Once the oxygen bubbles reach that lithium metal, it goes into an extremely hot reaction, like a sparkler on the Fourth of July. It's almost like an ignition."

In contrast, well-made lithium-ion batteries will turn off automatically if they get too hot, he said.

Overdischarging or overcharging can also lead to bad reactions or electrical shorts, Gordon said. So can using the wrong charger, which means users should be careful to only use chargers made specifically for the device, and not to overcharge the board if the device doesn't stop charging on its own, Gordon said.

He also cautioned that people should never pour water on a lithium fire. Instead, people can use chemical-based fire extinguishers and call 911 to put out the flames.

"Lithium fires are very dangerous, and we've had some catastrophic lithium fires, especially in the years [during the] development of lithium [batteries]," Gordon said.

It's possible that some low-quality hoverboards are using subpar lithium-ion batteries, said Paul Shearing, a chemical engineer at the University College London in the United Kingdom.

"Possibly one of the reasons that the batteries are becoming an issue there is that they don't have this protective circuitry or battery-management systems that will help to prevent dangerous charging and discharging," Shearing told Live Science.

Indeed, there are currently few regulations for hoverboards, and most of the boards are not made by recognizable brands, said Consumer Reports.

"They're generally purchased from Chinese factories by small companies you've probably never heard of (we hadn't)," Consumer Reports said. "These companies then turn around and sell the products in the U.S."

In the meantime, the U.S. Consumer Product Safety Commission (CPSC) is investigating at least 11 reports of hoverboard-related fires in 10 states from that past year, according to USA Today.