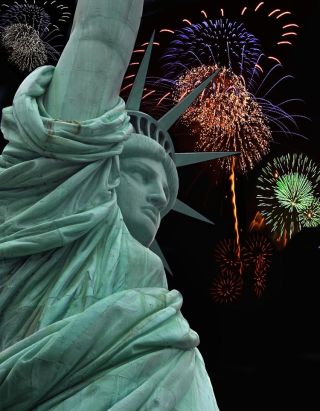 About halfway between the comparatively sedate Memorial Day and Labor Day holidays, you can't miss the pyrotechnical gloriousness that is Fourth of July. Come nightfall, thousands of fireworks displays will boom brightly across the country, celebrating America's birthday.

So how do these festive fireworks work? A firework, essentially, is a casing filled with explosives and combustible, colorful pellets called stars. These stars are the individual "dots" that glow in the sky. The most common type of firework, and the ones you'll likely see this year wherever you watch a civic firework event, is called an aerial shell.

"The aerial shell is the standard one people use … it's the mainstay on everything for professional displays," said Paul Nicholas Worsey, a professor of mining and nuclear engineering at the University of Missouri at Rolla and an expert in fireworks who teaches college courses on the subject. [Boom! 10 Fiery Facts About Fireworks]

The shell, which can be a ball or a cylinder, is filled with black powder, or gunpowder, and is typically launched from a mortar tube. "You actually project up a ball in the air, and that ball basically explodes," Worsey said.

A pouch of that black powder called the lifting charge ignites at the base of the firework, sending the aerial shell rocketing out of the tube. In the process, a delay fuse is lit within the firework. This fuse runs to another black powder pocket known as a bursting or break charge that goes kablooie in a few seconds when the shell reaches a desired height.

In turn, this explosion shoots out and sets on fire the little stars inside the firework. "The stars arebasically like little black balls — little black marbles, you might think of them," said Worsey.

Depending on the chemical elements they contain, the stars glow different colors as they burn.

Worsey explained that the easiest colors to generate are red with strontium and green with barium. Sodium produces a "strong yellow color," Worsey said, and magnesium makes white light. Blue is trickier and usually involve chlorine compounds and copper.

The razzle-dazzle of the stars changing colors is achieved by coating the star in various layers of different compositions, rather like a Gobstopper candy. "The outside burns first and burns inwards, and as it goes through the different layers the star will change color in the air," Worsey told LiveScience.

Other compositions containing longer-burning gold or silver make for the trailing, weeping willow-like effects. "Something that burns a long time? Gold is a good one for that," said Worsey. "It'll go down almost to the ground before it goes out."

Titanium can be used for a sparkling effect, Worsey said, while the particularly loud, noisy or crackling firecrackers usually contain some sort of flash powder, such as magnesium perchlorate, that burns quickly.

To craft fun, illuminated shapes, such as rings, "Saturns," smiley faces and hearts, fireworks manufacturers place the star pellets in a particular pattern.

A piece of cardboard as an insert can force the stars to burst out in the intended shape, and packing the stars in inert materials that do not burn when the firework goes off can also help with getting the shape right. [How Do Fireworks Make Shapes?]

"The trick is the positioning of the stars," said Worsey. "When [the firework] explodes, it goes out in that pattern."

Although fireworks were invented in China as early as the seventh century B.C.E., their manufacturing techniques and technologies continue to evolve through today to give us ever-more eye- and ear-popping shows.

One of the neatest and more recent innovations, Worsey said, is the ability to create cube-shaped explosion patterns through careful placement of the stars. Designers keep rolling out new amazing shapes, so keep your eyes peeled this Fourth of July.

"We keep seeing new innovative things every couple years," Worsey said. "We're going to see a lot of great things in the future."