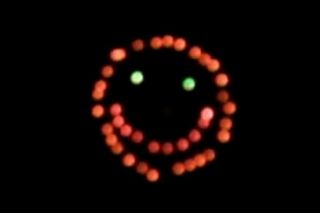 On Independence Days of yore, old-timey crowds were dazzled by a mere sprinkle or two of off-white lights. Later generations oohed-and-aahed at more colorful displays, as chemical combos were developed that could light up the sky in Technicolor.

The march of progress in pyrotechnics didn't stop there, though. Today, patterned fireworks that burst into smiley faces, the ringed planet Saturn, hearts, stars and other shapes are the state-of-the-art in the field.

What is the science behind these newfangled patterned fireworks? How do they work?

"It comes down to the construction of the aerial shells," said Julie Heckman, executive director of the American Pyrotechnics Association. Aerial shells are cylindrical casings packed with "stars" the small, combustible pellets that make up fireworks' dots which, when ignited, propel into the air and then burst open.

When igniting patterned shells, pyrotechnicians usually ignite several at once as they cannot control the orientation that any one shell will have at the moment that it bursts. If the cardboard insert happens to be angled along the line of sight of the crowd, for example, they'll only see a line of stars when it bursts open rather than seeing the stars' arrangement head on. If several shells are used at a time, at least one of them is likely to be oriented correctly.

Pattern shells were first used in the early 1990s in Washington D.C. to greet Desert Storm troops upon their arrival home. "The patterns that were used there were purple hearts and yellow bows," Heckman said. [Read: Where Did the Purple Heart Come From? ]

No single person is recognized as the official inventor of patterned shells; Heckman said they could have been developed by many engineers working together at a pyrotechnics company possibly in China, which is the largest manufacturer and exporter of fireworks in the world.

According to Heckman, new shapes are thought up all the time, so who knows what you'll see in the sky this 4th of July.