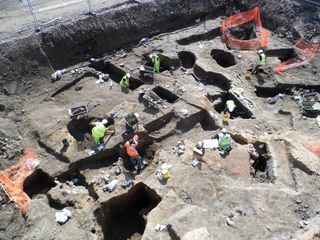 Archaeologists excavate large areas of medieval and post-medieval pitting in the backyards of properties running along Southgates.
(Image: © University of Leicester)

Backyards haven't changed much over the past 1,000 years or so, new archaeological findings suggest.

Rubbish pits, storage areas, outhouses, wells and short walls to keep the neighbors at bay are a few of the things that archaeologists in England recently unearthed while digging beneath an old bus depot in the city of Leicester. Dating back to the 12th through 16th centuries, these artifacts were found in what was once an area of densely packed houses and shops, according to archaeologists from the University of Leicester Archaeological Services (ULAS).

And beneath the garden walls (and the rubbish) the archaeologists found the remains of another, more ancient cityscape. The backyards covered up the place where two second-century Roman roads once intersected. Arched gravel surfaces cover the roads, and drainage gullies, as well as the remnants of stone and timber buildings, line either side of the ancient thoroughfares. [See Photos of the Medieval Backyards and Artifacts in Leicester]

"These excavations will provide important new insights into the character of the settlement and the inhabitants living in the southern half of the Roman and medieval town," John Thomas, one of the ULAS archaeologists who led the dig, said in a statement.

The area that Thomas and his team recently excavated lies in Leicester's "historic core," where other significant Roman and medieval sites have also been unearthed. Just down the road there's a Roman forum, or plaza, and public baths. And in 2012, archaeologists uncovered the remains of King Richard III at the nearby site of GreyFriars, a medieval Franciscan friary.

Some of the Roman artifacts discovered beneath Leicester's old bus depot were in poor repair, but many ancient treasures remained intact. The archaeologists uncovered a stretch of mosaic pavement and a piece of painted plaster wall. They found smaller items as well, including coins, fine tableware, a copper spoon, game counters, bone hairpins and other pieces of jewelry.

"This part of Roman Leicester is very poorly understood because there has been little previous archaeological investigation in the vicinity. One of the Roman streets found on the site has never been seen before in Leicester and isn't on any of our plans of the Roman city, said ULAS archaeologist Mathew Morris. "This is a significant find and raises exciting new questions about the layout of the early Roman town and how it evolved through the Roman period."

Morris and Thomas are part of an archaeological team tasked with investigating this historically rich section of Leicester before the start of a new construction project in the area.