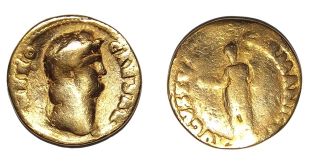 A rare aureus, or gold coin embossed with the image of Emperor Nero was unearthed in a Roman-Era site in England
(Image: © © Vindolanda Trust)

A rare gold coin from the Roman Empire has been unearthed in England.

Archaeologists found the valuable coin, which is embossed with the image of the hated Emperor Nero and dates to between A.D. 64 and 65, at a site in Northern England. The archaeological site, called Vindolanda, was once a Roman fort near Hadrian's Wall.

"My first find at Vindolanda nearly 20 years ago was a coin, but because of their scarcity, I didn't think for a moment that I would ever see a gold coin unearthed at the site. It was an absolutely magical moment for the whole team," Justin Blake, the deputy director of excavations at the site, said in a statement. [The 7 Most Mysterious Archaeological Finds on Earth]

The weighty piece of currency, called an aureus, would have equaled more than half of a soldier's yearly salary at the time.

A volunteer, Marcel Albert from France, unearthed the ancient coin in a layer of sediments that dated to the fourth century and that various archaeological teams had thoroughly scoured over several decades. Though the site has yielded thousands of coins over the years, none have been gold.

"I thought it can't be true. It was just sitting there as I scraped back the soil, shining, as if someone had just dropped it," Albert said in the statement.

The fact that the coin is much older than the archaeological layer in which it was found suggests it had been circulating for more than 300 years before it was lost.

Emperor Nero was one of the most controversial figures of the Roman era. He rose to power at the tender age of 16 under his mother's thumb, but went on to murder her and at least one of his wives.

He was also suspected of starting the great fire of Rome and then pinning the blame on Christians. He then executed many of them, burning the religious minority for sources of light in the evenings, setting wild dogs upon them or nailing them to crosses, according to the annals of Roman historian Tacitus.

In order to build an opulent, golden palace in Rome, Nero scrambled for financing, searching for the lost treasure of Queen Dido of Carthage and even looting treasures from Greek and Roman temples, the annals read.

The emperor then issued more gold coins than previous emperors had done, though the coins were noticeably slimmer than in the past.

Emperor Nero was eventually ousted from power in a rebellion in A.D. 68 and committed suicide before he could be executed.