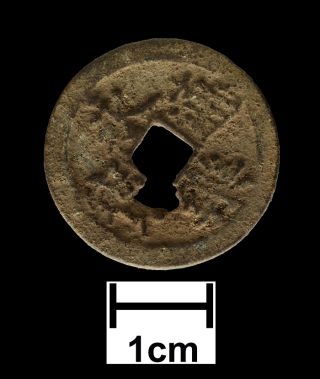 This Chinese coin, issued between 1403 and 1425, was found during excavations at the island of Manda in Kenya.
(Image: © John Weinstein/The Field Museum)

A Chinese coin about 600 years old was recently unearthed on an island just off the coast of Kenya. If it proves to be authentic, the coin could show that the Chinese explorer Zheng He — like a Christopher Columbus of the East — came to this part of east Africa.

"This finding is significant. We know Africa has always been connected to the rest of the world, but this coin opens a discussion about the relationship between China and Indian Ocean nations," archaeologist Chapurukha M. Kusimba of The Field Museum in Chicago said in a statement.

The copper and silver disk has a square hole in the center, possibly to be worn on a belt. Kusimba told LiveScience it was found on the first day of excavations at Manda, an island that hugs Kenya's coast about 200 miles (320 kilometers) northeast of Mombasa. A joint expedition, led by Kusimba and Sloan R. Williams of the University of Illinois at Chicago, spent this past December through February studying the site.

The coin was issued from 1403 to 1425, and it bears the name of Emperor Yongle, leader of the Ming Dynasty who started building China's Forbidden City. At that time, Manda was nearing the end of its reign as a trading post. In 1430, the island was abandoned and never inhabited again. [Photos: The 10 Rarest US Coins]

Kusimba believes the coin could prove the island was visited by Zheng He, a court eunuch who rose to commander of the Chinese Navy. Emperor Yongle sent Zheng He on several ambitious voyages to explore the lands bordering the Indian Ocean and expand Chinese trade and political influence.

"Zheng He was, in many ways, the Christopher Columbus of China," Kusimba said. "It's wonderful to have a coin that may ultimately prove he came to Kenya."

The researchers got permission from the Kenyan government to export the coin to Chicago, where it is undergoing chemical analysis at The Field Museum. "We just want to be sure that it's an original government issue rather than a counterfeit," Kusimba told LiveScience.

The team will head back to Manda this coming December for another digging season; they plan to publish their findings in a peer-reviewed academic journal.

"This is one of the oldest sites in Sub-Saharan Africa and I think it's going to inform us a lot about the early relationship Africa had with Europe and Asia," Kusimba said.