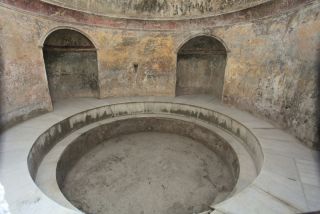 A pool in an ancient Pompeii bath.
(Image: © mary416 , Shutterstock)

Ever go swimming with rings on your fingers or hoops in your ears only to find your jewelry had vanished after your dip?

If so, you've got something in common with ancient Romans.

A new study of objects lost down the drains in the bathhouses from the Roman Empire reveals that people got up to all sorts of things in these gathering places. They bathed, of course, but they also adorned themselves with trinkets, snacked on finger foods and even did needlework.

"For the Romans, the baths weren't just a place to get clean, but this larger social center where a variety of activities were taking place," said study researcher Alissa Whitmore, a doctoral candidate in archaeology at the University of Iowa

In the Roman Empire era, baths proliferated all over Europe for both military and civilian use. Many were quite ornate, with huge colonnades, decorative mosaics and pools ranging in temperature from frigid to steamy.

Ancient texts give some clues as to the variety of activities that took place in bathhouses, Whitmore said, but the texts are maddeningly vague on some details. So Whitmore turned to the concrete evidence: objects found in the floor and pool drains of the ruins of baths.

This early plumbing offers good insights, Whitmore told LiveScience, because it fairly certainly contains items lost or thrown away during the era of bathing. The Romans eventually abandoned the majority of their baths, leaving the structures to crumble, she said. Squatters moved in, leaving behind objects on floors and in other spots that wouldn't represent the items used when the baths were still functioning. [In Photos: The Baths of Bath, England]

Whitmore examined drain finds from 11 public and military baths in Italy, Portugal, Switzerland, Germany and Britain, all dating between the first and fourth centuries. Unsurprisingly, she found strong evidence of objects related to bathing, such as perfume vials, nail cleaners, tweezers and flasks for holding oils and other pampering products.

On the less-relaxing side of things, evidence shows medical procedures may have occasionally occurred in the baths, Whitmore found. Researchers found a scalpel lodged in one drain. And in the Caerleon baths in what is now Wales, archaeologists uncovered three adolescent and two adult teeth, suggesting bathhouse visitors may have undergone some dentistry, too.

Visitors also took their meals in the baths, judging by the fragments of plates, bowls and cups found swept into drains. At Caerleon, bathers snacked on mussels and shellfish, Whitmore said, while baths in Silchester, in the United Kingdom, showed traces of poppy seeds. Bones left behind reveal that Roman bathers enjoyed small cuts of beef, mutton, goat, pork, fowl and wild deer.

"Ancient texts talk about finger food and sweets, but don't really talk about animals," Whitmore said. "That was interesting to see."

Archaeologists have also found signs of gaming and gambling, including dice and coins, in various bathhouses. Perhaps most surprising, Whitmore said, researchers found bone and bronze needles and portions of spindles, suggesting that people did textile work in the baths. [Gallery: Glittering Roman Baths]

This work likely wouldn't have happened in the water, she said, but in dressing rooms or common areas that had seating. The needles may have belonged to bathers who brought needlework to pass the time, or employees may have brought the sewing equipment, offering tailoring or other services at the sites while bathers relaxed, Whitmore said.

Among the sparkliest finds in the drains were pieces of jewelry. Archaeologists have found hairpins, beads, brooches, pendants and intaglios, or engraved gems, in bathhouse drains. A number of these finds definitely come from pool areas, Whitmore said.

"It does seem that there's a fair amount of evidence for people actually wearing things into the water," she said.

Bathers may have held onto their jewelry in the pools to prevent the valuables from being stolen, Whitmore said.

Or perhaps vanity inspired them.

"It's really a place to see and be seen," Whitmore said. "It makes sense that even if you had to take off your fancy clothes, you would still show off your status through your fancy jewelry."

Unfortunately, dips into hot and cold water would have loosened jewelry adhesives and caused metal settings to expand and contract. As a result, a number of unlucky Romans emerged from the baths considerably less bedecked than when they entered.

Whitmore reported her results Saturday (Jan. 5) at the annual meeting of the Archaeological Institute of America in Seattle. She plans to expand her analysis of bath artifacts to better compare changes in activities over time and in different regions. One constant she's already found, she said, is the presence of women, even at baths on military bases.

"It adds further evidence that Roman military forts aren't entirely these really masculine areas, but a much wider social atmosphere than we tend to give them credit for," Whitmore said.