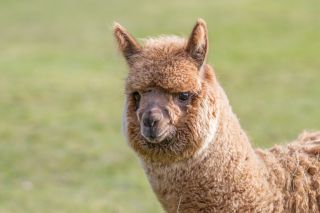 Alpacas come in 22 colors, from black to tan to white.
(Image: © sinagrafie | Shutterstock)

Guanacos and vicuñas are found throughout the Andes Mountains. They are descended from camelids that developed in North America and migrated to South America 3 million years ago, according to Phil Switzer, an alpaca breeder based in Colorado. These animals evolved into guanacos and vicuñas, and about 6,000 years ago, people in the Andes began to domesticate them. There are two breeds of alpaca, the Huacaya and the Suri. Huacaya alpacas are more common, according to Switzer.

The main difference between the breeds is the length and fineness of the wool-like fiber, according to the Food and Agriculture Organization of the United Nations (FAO). The Suri have very long fibers ("silky dreadlocks," according to Alpaca Ventures), while the Huacaya have a more compact "crimpy" fleece, with shorter fibers.

Guanacos are slightly larger than alpacas and much larger than vicuñas, but they are smaller and less heavily built than llamas, according to the University of Michigan's Animal Diversity Web (ADW). Alpacas are the smallest members of the camel family. The average height at the shoulder is 3 feet (91.4 centimeters), according to Switzer. They are 4 to 7 feet (120 to 225 cm) long and weigh 121 to 143 lbs. (55 to 65 kilograms).

Wild guanacos and vicuñas live in a wide range of habitats, from the high and dry Atacama Desert in northern Chile to the wet and stormy Tierra del Fuego at the southern tip of the continent, according to the ADW. Alpacas are also native to the Andes, at elevations of up to 15,750 feet (4,800 meters).

Alpacas, however, are very adaptable and have been exported all over the world, including the United States, New Zealand, Australia and the Netherlands, so their "habitat" is often farmland. Still, 99 percent of the world population of alpacas is found in South America, according to the ADW.

Alpacas are very social creatures. They are gentle and curious and with training can become great pets, according to Switzer. Herds often include animals of different species or taxonomic families, such as llamas, goats and sheep, according to the FAO.

Alpacas spit when they are distressed or feel threatened. They will sometimes spit at each other when they are competing for food or trying to establish dominance, according to Switzer. They won't spit at people or bite unless they have been abused.

Alpacas hum; they make a sound like "mmm," according to Alpaca Ventures. However, they also shriek when danger is present, and make a sound similar to a "wark" noise when excited. Fighting males scream, making a warbling bird-like cry.

Alpacas in a herd all use the same area as a bathroom instead of defecating in random areas like many animals do. This behavior helps control parasites, according to the FAO. Males often have cleaner dung piles than females, according to Alpaca Ventures. Females tend to stand in a line and all go at once.

As herbivores, alpacas only eat vegetation. They eat mostly grass, but their diets can also include leaves wood, bark or stems. Like other ruminants, alpacas have a three-chambered stomach that digests the roughage efficiently.

Unlike other grazers, alpacas don't eat much. According to the Alpaca Owners Association, a 125-lb. (57 kg) animal only eats around 2 lbs. (907 grams) per day. In general, alpacas eat 1.5 percent of their body weight each day.

Alpacas breed once a year, and as livestock they are often induced to breed at any time. The female alpaca has a gestation period of 242 to 345 days and gives birth to just one offspring. The birthing process can take up to seven hours, according to National Geographic.

According to the Integrated Taxonomic Information System (ITIS), the taxonomy of the alpaca is:

For many years, zoologists assumed alpacas and llamas had descended from guanacos, and they were classified in the genus Lama. However, in a 2001 paper titled "Genetic analysis reveals the wild ancestors of the llama and the alpaca" in the journal Proceeding of the Royal Society B, researchers showed there is "high genetic similarity" between the alpaca and the vicuña, and between the llama and the guanaco. They recommended that the alpaca be reclassified as Vicugna pacos.

The International Union for Conservation of Nature does not have entries for alpacas on its Red List of Threatened Species. Guanacos (Lama guanicoe), however, are listed as Least Concern for extinction due to their wide range, large populations and occurrence in protected areas. Similarly, the IUCN lists vicuñas (Vicugna vicugna) as Least Concern.

Llamas and alpacas can crossbreed. The offspring are called huarizo.

Alpaca fur is a very prized fiber for artisans and crafters. Alpaca fur is very soft and does not retain water. It is also very durable. According to National Geographic, alpaca fur is the second strongest animal fiber, after mohair.

Alpacas come in 22 colors, from a true, blue-black through browns and tans to white, according to Alpaca Ventures.

Some Andean people eat alpaca meat. In Peru, it is often served in upscale restaurants.

Alpacas don't have teeth in the top-front of their mouths. This gives them the appearance of having an underbite.