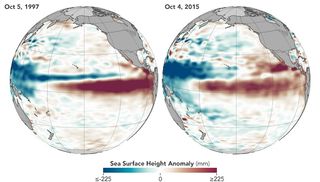 Sea-surface height is an indicator of water temperature because warm water expands. Here, a map of sea surface height in October in the equatorial Pacific as compared to the same period in 1997. The 1997 - 1998 winter was one of the wettest on record, thanks to a strong El Niño.
(Image: © NASA Earth Observatory)

It's official: El Niño is back.

This winter is likely to be wetter and warmer than average, thanks to a strong El Niño brewing in the Pacific Ocean that will probably persist through the winter, forecasters said today (Oct. 15) during a news briefing.

"We won't be able to officially rank it until it peaks out and ends. But our expectation is that it will be amongst the three strongest," with the other strong El Niño events occurring in the 1997–98 and 1982–83 winter seasons, said Mike Halpert, the deputy director of the Climate Prediction Center, part of the National Oceanic and Atmospheric Administration (NOAA).

The strong subtropical weather pattern boosts the odds for rainfall and warm temperatures across the Southern United States and the Eastern Seaboard — including drought-stricken regions such as California and the Southwest.

But even if California is inundated with rain, the state's water woes probably won't be eliminated in one season, the experts said. [Infographic: How El Niño Causes Wild Weather Across the Globe]

El Niño weather patterns occur when warm water from the western tropical Pacific Ocean shifts toward the equatorial coast of South America, nudging tropical storms eastward. Because moisture-laden air causes thunderstorms, and because the greatest amount of water evaporates from the oceans in the warm, tropical areas, El Niño weather patterns tend to bring high-precipitation thunderstorms and warmer weather to the United States. El Niño and its counterpart, La Niña, are part of the El Niño-Southern Oscillation, or ENSO, cycle.

This season, a strong El Niño is in the cards. But that doesn't guarantee warm and soppy forecasts, Halpert said. Other, more unpredictable climate systems such as the North Atlantic and Artic oscillations, as well as local weather events, can also affect winter storms.

"The climate system is far more complicated than just El Niño, even a strong one," Halpert said.

However, based on the current status, there is about a 60 percent chance for warmer weather than average across the Northern United States, and about a 70 percent chance of wetter weather across the South, he said. Meanwhile, the Rockies, the Great Lakes region, Northern Alaska and Hawaii are expected to face drier-than-average conditions, he said.

California is facing its worst drought in hundreds of years, with snowpack at record low levels across much of the state. Nearly half the state faces exceptional drought, with all of the state experiencing some drought, according to the U.S. Drought Monitor.

The El Niño could improve the parched conditions, though exactly how much isn't clear, said Allen Haynes, a hydrologist with the California Nevada River Forecast Center.

The winter forecast does predict wetter weather across Southern California. However, much of the state's water supply comes from snowpack in Northern California, and weather is only weakly correlated to El Niño events there, Haynes said. In addition, the mountains in the north of the state tend to be lower in elevation, so warmer weather could also mean the storms cause heavy rainfall but do not add to the snowpack, the water storage bank for much of the state, Haynes said.

Even if the El Niño brings strong precipitation to Northern California, where it matters most, the soakings are unlikely to erase the four-year deficit in water from the multiyear drought, he said. For instance, the wettest year on record, 1983, brought twice the average yearly precipitation, but completely erasing the current deficit would require between 2.5 and three times the average annual rainfall, he said.

"A full recovery is likely to be uneven across the West and is also likely to take more than one season of above-average precipitation," Haynes said.

In addition, strong rainfalls could bring flooding, especially in areas scarred by forest fires, which lack the natural barriers that absorb water and slow down runoff, Haynes said.